You may be looking for the fan Barbarella aka bar_bar_ella. 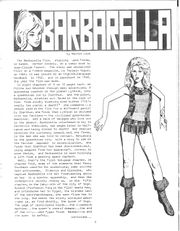 Barbarella (also marketed as Barbarella: Queen of the Galaxy) is a 1968 science fiction comedy film starring Jane Fonda, based on a French comic series of the same name.

The film saw interest in the sf community through the seventies and was theatrically re-released in 1977 following the success of Star Wars.[1] Reviews of Barbarella appeared in both sf zines (The Clipper Trade Ship #7, 1975) and comics zines (The Heroine Addict, 1974 and 1976).

Sometimes considered a cult film, its aesthetic and fashion in particular have become iconic among classic sci-fi sources. Barbarella cosplay and fanart are common.

The film is also notable for being femslashy in the interactions between Barbarella and the Black Queen, the antagonist portrayed by Anita Pallenberg.

In the background on Fonda's popularity stemming from Barbarella, Jerry Lembcke writes in the book Hanoi Jane:

When my Google search turned up 104,000 links to Internet sites, I knew that Barbarella was a twenty-first-century phenomenon.11

The content of the Barbarella sites are clearly female-identified. One of the first links is to the "Barbarella Festival," an all-girl effort to stage an annual rock 'n' roll/garage band concert in Uppsala, Sweden; they signed their early press releases "the Barbarella movement." Other sites bring the movement to fans through clubs, memorabilia sales, film reviews, and shared historical/interpretive information. Notably, the Internet interest is purely in the fictional character Barbarella, with one "Barbarella Headquarters" site even stating that its purpose is "not meant to honor Jane Fonda or her political views." On one personal Web site, a blogger calling herself Barbarella posts her diary.

11. For perspective, a search for "spider woman" done at the same time (June 13, 2003) produced about fifty thousand links, though Spider Woman is an on-going comic series with a large following of young readers. The number of links produced by a search varies, and depends on when the search is done.[2]

Connections with Other Fandoms

The band Duran Duran takes its name from the character Durand Durand (the object of Barbarella's quest and film's ultimate antagonist). Their 1997 song "Electric Barbarella" is a tribute to the film. There is an Italian Duran Duran tribute band named Barbarella.