The next five issues, plus a stray from after the name changed.

The Heroine Addict is a gen zine focusing on female characters in comics. There were eleven issues, and then with issue #12, it became The Heroines Showcase. This zine was published in San Jose, CA.

Martin Lock writes about its history on the zine's current website:

I've helped our Covers supremo here with a few scans either from my collection or from searching the internet's little nooks and crannies... and then he asked if I was the same Martin Lock who had been involved with the Comics Heroines Fan Club back in, gulp, the 1970s... and I had to admit that, yes, I was. I'd been a member of the team under Al Tanner and later Steven R. Johnson, both sadly no longer with us, and had masterminded the first "UK Heroine Addict" as a cunning ploy to increase the club's British membership. There was a second UK issue too, but that was made in America, with rather less involvement from me, but in Britain the first THA-UK went out to all the subscribers to Bem, the news and comment comics fanzine I was in charge of... and thanks to the international mail system, it went to the main US membership of the club too. The link to the page covering those two issues is over on the left.

There have always been social networks, well before Facebook was a glint in its creator's parents' eyes, though in olden days they tended to involve local people one worked with, went to school with, or met at local get-togethers... but science fiction and comics fandom had a world-wide web of friends and co-contributors, thanks to fanzines, amateur press associations, and conventions long before Tim Berners-Lee first linked up the internet and sent that immortal first message, "Mr Gates - Come here - I want to see you, lol." (or I may possibly be thinking of what Alexander Graham Bell first said over the telephone... like, Google it, okay?). The Comics Heroines Fan Club was one such manifestation of the power of fandom. Sadly, Al Turner and Steven R. Johnson are no longer with us, but people like Bob Rodi, Tom Luth, Mercy van Vlack, Lela Dowling, and many other CHFC members are living long, and prospering.

Our Mr Covers had been a member of the CHFC, and recently managed to re-acquire all the copies of the main magazine, and portfolios (though not, as yet, any of the fan fiction magazine The Adventuress) via a well-known auction site - I may have copies in the attic somewhere, but there are rather a lot of boxes tucked away up there, so I can't put my hands on them. So, he very kindly sent me copies in pdf form of the two UK-themed issues, the first one when the club's magazine was still "The Heroine Addict" and the second when it had become the more respectable-sounding "The Heroines Showcase", and he suggested they should be put online as part of the site, for people to download. And then he decided to scan all the US editions too - and those are what we link to on this page. So, here they are, for a new generation to enjoy. It was all good clean innocent fun in those days, and an attempt to spotlight the neglected heroines of comicdom. You know, with all the issues here, plus portfolios etc, I think we may have actually helped to bring our favourite comics heroines the respect they deserved...

It's interesting to see who provided covers here; Carol "Strick" Strickland started the ball rolling, followed by Ted Delorme, CHFC art mainstay Mercy van Vlack, Carol Strickland again, Kirk Hastings, Tom Luth & Tom O'Reilly, Bob Rodi, Tom Luth solo, Mercy again, Wes Smith... moving on to people like Brent Anderson, Lela Dowling (with a back cover by Frank Cirocco), Steve Leialoha, Frank Brunner, Gary Winnick, Trina Robbins, Lisa Free, and Wendy Pini. Quite a few of the covers were actually wrap-around ones, but I've only used the front halves on this page - check out the pdf files for the full-sized versions. The club was never a money-making operation, everyone did their work for the magazines out of, well, enthusiasm and love for the medium.

I should just mention that the "BCOTD" site is wholly the work, one day at a time, of our Covers Ace. All I've been involved with are these Comics Heroines Fan Club pages, apart from occasionally, like a number of other people, helping him find a better-quality scan of a cover that he was looking for... so all credit for him for his continuing work. [...]

Anyway, download the files that our guru has uploaded for us, and set your calendar back to the seventies. [...] The Black Widow, Barbarella, Thundra, Modesty Blaise, the winsome Wasp, Wonder Woman, Zatanna, and Saturn Girl, all the female Legionnaires, and many other fighting females from the rich history of comics are waiting for you...
- Martin Lock

The Heroine Addict 1 was published in September 1974.

The Heroine Addict 2 was published in December 1974.

The Heroine Addict 3 was published in Februar 1975.

The Heroine Addict 4 was published in April 1975.

The Heroine Addict 5 was published in June 1975. 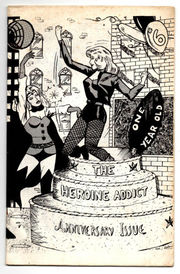 The Heroine Addict 6 was published in August 1975.

The Heroine Addict 7 was published in October 1975 and contains 40 pages.

The Heroine Addict 8 was published in December 1975.

The Heroine Addict 10 was published in summer 1976. 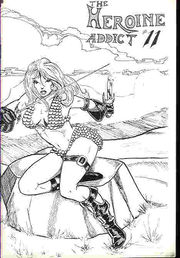 The Heroine Addict 11 was published in Summer 1977 and contains 31 pages.

I can't pretend to remember the full details of how a British edition of the CHFC's fanzine came about, but I was able to produce a relatively slim first issue, assisted by Al Tanner and the usual US contributors, which went out to subscribers to my regular fanzine Bem along with an issue of that, as a cunning ploy to increase the club's British membership.. and thanks to the international mail system, it went to the main US membership of the club too. The second UK issue was made in America, with rather less involvement from me and the other Bem people who had been involved, and calling on the full resources of the club. It was a lot slicker, and with rather fine full-colour cover front and back covers by Lela Dowling. It was certainly fun to re-read articles and columns from over thirty years ago. I used the name "Ruan Lanihorne", from a village in Cornwall, in fanzines for my articles about British comics mainly...I was amused to see that he'd sprouted his own pen-name in the first issue here - or at least I think "Harlan Noriune" is an anagram of his name! I also got involved with the artwork side; things were less sophisticated all those years ago, and art that was slavishly copied was useful. The cover of the first issue here is, um, very closely based on a promotional piece by Dick Giordano, though with Lois Lane and Mary Marvel carefully removed. Still, as a fan artist I never claimed to be original, hence the name involved...
- Martin Lock