BAAD SH Theatre (spelled a variety of ways: "BAD," BAAD," "BAAAD") was a Starsky & Hutch convention activity that started out as a reading of poor fanfiction, and later became the con skit, a play that is always a sterling representative of the worst of slash writing at SHarecon. 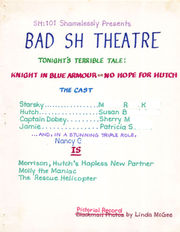 cover of Bad SH Theatre 1991: The play was Knight in Blue Armour, or No Hope for Hutch

At the first Sharecon in 1989 (which had only 15 attendees), fans started the "BAAAD SH Theater" by reading fanfiction that wasn't particularly well-written. The readers didn't identify the author, although many attendees knew who it was anyway. Fans felt safe doing this because there was no Internet and they felt they were doing it for their own private entertainment and not to make public fun of someone. The attendees also knew each other well enough that they were certain no one would write to the authors in question and make them feel bad.

As the convention grew in size and as, in later years, the Internet brought large communities of readers and writers closer together, BAAD SH Theatre stopped using "real" stories but began writing their own original badfic.

Later, the BAAD SH Theatre made another change. It became not reading of badfic, but the name of the con skit, one which was an all-encompassing parody of Starsky & Hutch cliches and tropes.

A Description of the 2004 Event

The BAAD theatre play was--as always-a riot with Kath Moonshine as Alaster Cooke. Suz as Hutch once again lost her blond wig, but her mustache stayed put! Sonia made a perfect Huggy bear in a huge pink zebra striped pimp hat and Taya is the quintessential Starsky with her masses of curly hair. Elaine, Jen, Laura and I mugged in the background as gay bar patrons. I kept rearranging the toy zebras on the bar in (hopefully) naughty positions. There were these squishy plastic penis things, too. [1]