Ares is a recurring character on Hercules: The Legendary Journeys, Xena: Warrior Princess, and Young Hercules, based on the god of war in Greek Mythology. He was played by the late Kevin Tod Smith (the New Zealand actor, not the American director).

One episode on Xena implies that he might be Xena's father, but in many other episodes they carry on an antagonistic flirtation. He has also had canon romantic ties with Xena, Nemesis, Hope, and Eve. He also had his powers/immortality taken away several times throughout the show's existence. Like the actor who played him, Ares was an excellent singer, having some episodes addressed his musical side. 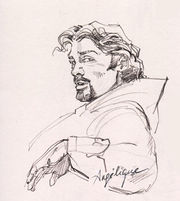