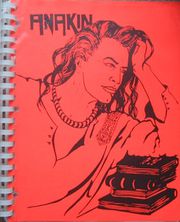 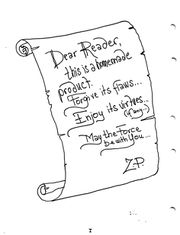 Anakin (zine) is a single-author adult Star Wars het zine by Z.P. Florian. It is 85 pages long and contains two stories. All of the art is by the author.

Some of it was later reprinted in Han Solo.

From an ad in Southern Enclave: "The passionate life of Darth Vader, never before revealed. A large dose of Palpatine rising and Kenobi falling. Meet Luke's mother and live to regret it. See the young Jabba, Chewie, boy Han and twins. For those who think Vader is more man than machine. With illustrations. Magnificently xeroxed by hand."

Any zine that makes me laugh out loud with delight over the dialogue is a welcome addition to my collection! Not that Anakin by Z.P. Florian is a humor zine; no, its subject is as serious as the eternal query after the source of evil. But in her telling of how Anakin Skywalker came to be Darth Vader, and the consequences thereof for a future generation, her characterizations are witty and adult and free of sentimental cliches that feel good but cloud difficult questions.

Not that feeling is missing here. Passion abounds, but it is serious, down-to-the-soul passion that covers the range of human lust; power, recognition, sex, love, wealth; this is not the Saturday night special kind of desire that yawns awake Sunday morning, sated once more and willing to live an uneventful life until next weekend. The interaction between the younger Palpatine and young Anakin Skywalker alone are worth the modest cost of the zine. This is a would-be Emperor fleshed out with family background and a personality that make him a perfect foil for Skywalker's cold passions. There is not much discussion of philosophy here, but philosophy is not the author's point. Rather, she explores the compromises and dependencies of high ambition. Her Palpatine is an obsessive Force-user, ambitious but aware of his lack of the social graces so necessary to politician success. Anakin is beautiful, graceful and increasingly willing to use his charisma to gain knowledge and power. And yet both are very ordinary—with Palpatine's complaints about a greedy father who always seems to bollox his son's plans, or with Anakin's continual slips into a young man's bravado. Obi-Wan, Luke and Leia's mother, Bail Organa and others are supporting characters, each dazzled by and drawn to Anakin Skywalker in his or her own way. Florian's style of writing hits the high points of the plot development with the expectation that the reader can fill in the in-between action. A warning if you are unfamiliar with non-English fiction: be prepared for a dialogue that is not colloquial American English. Florian is Hungarian; the vocabulary she uses may ring oddly to the American ear at first. Don't let it bother you, please; the unfamiliar language support Florian's fresh angle on characters and subject, and more than make up an occasional awkwardness. Anyone who has come from a multi-lingual home, or who has command of a second tongue, will recognize the variations of inflection and imperative that appear in Anakin. And, although I hope Florian has her next story read by a native speaker to clear up any occasional misusage, I likewise hope that such editing does not destroy the wonderful flavor of the writing. There is a follow-up story in Anaktn that expands the references in the lead story to a Wookiee and a Corellian child who survive an early Palpatine assassination. Florian's Han is the familiar teenage male hacker, techie-wise with tunnel vision; her Chewie has very interesting reasons for his involvement with young Solo. Perhaps the different use of language is most obvious here as it comes up against the familiar image of Han as a space cowboy/trucker/all-American Mr. Independence; however, once I put aside noticing that Florian's Han failed to match the stereotype, and just went with the characterization, it all worked. And, I have certainly read such young man's language in stories out of Eastern Europe; there's more than one measure for a hot-shot here on Earth as well as in the greater Universe! I'm assumming Florian did the art—which is competent and direct linework in keeping with her story. Her Anakin certainly captured the attention of a young man in our office! If you're a fan who really likes slick zines, be warned that Anakin's focus is on the story, not the production. Nothing fancy here, just double-space, full-size type with dark and legible printing. The binding is 2 brads in three-hole punch paper with a neon bond cover. For me, the presentation was completely acceptable; I could read it late at night after a full day on the computer without my eyes going cross-eyed or my wrist aching from trying to hold it up in bed.

In solitary, I highly recommend Anakin; it's a fine addition to SW fan fiction! [1]