All Our Yesterdays (Star Trek zine by Rostirasa)

All Our Yesterdays is an annual club zine for Rostirasa.

The first issue was called Rostirasa and noted that if it further issues received submissions from other fandoms, the zine would become multimedia. It also noted that issue two would have a contest to find a Star Trek name more suitable than "Rostirasa."

The name of the zine is derived from: "Revival of Star Trek in Rochester and Surrounding Areas."

The club has a sister zine, a newsletter called The Duty Roster.

All Our Yesterdays 2 was published in July 1988 and contains 32 pages. 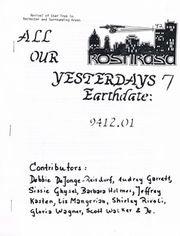 cover of the seventh issue (December 1994)

All Our Yesterdays 7 was published in December 1994 and contains 95 pages. It is a compilation of clippings, photos, articles, episode reviews, fiction (TNG), cartoons, con reports, and club news. It may be the club's annual with reprints from other zines.