Alex Through the Looking Glass 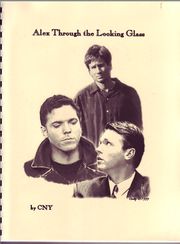 Author's summary: "Alex Krycek finds himself face-to-face with another version of himself in an alternate universe—a very dangerous and seductive Alex Krycek. Alex quickly realizes he may not live to see the morning, much less ever return to his own world."

It took several years to write this story and Cody Nelson's introduction gives some insight into how this novel was created:

This story was born sometime around Christmas 1995 as the result of a chance remark on a GEnie discussion group. Several of us were writers and fans of Mulder/Krycek; I believe it was Jane Mortimer who commented that she’d like to see what would happen if my Krycek, who tends to be of the Well-meaning Innocent Who Got in Over His Head variety, met up with another writer’s Dark and Dangerous Krycek. The other writer replied that her Krycek would most likely look mine over and say something like, “You’re an X-File. You don’t want me, you want Mulder.” But she had no idea how mine would respond to this, so she could go no further.[1]

Cody and the other writer started to email back and forth paragraphs and it grew into more.

The novel (and it was months and many thousands of words later before we came to realize that we were actually writing a novel, with a plot and everything) continued to grow over the following months and years. We emailed each other new scenes and had extensive discussions about our respective Kryceks. There were several cross-country visits in which we sat together with our laptops and handed scenes back and forth on floppy disks, and my co-writer took me on walks through her Krycek’s neighborhood.

Created as it was through a kind of spontaneous combustion, with no real planning, and sprawling out over several years with occasional lulls of weeks or months as other matters took over our lives, the story was naturally subject to the occasional diversion and plot tangent. We have attempted in this final version to smooth over the rough spots, fill in the blanks, and correct the continuity variations as much as possible, but have left the overall structure pretty much as it happened.

The Alex of this story is a slight variation on the Krycek of my earlier Mulder/Krycek novel, Il Traviato. In fact, this story may be considered an AU or alternate ending of that novel, beginning where Il Traviato’s Act Two ends, and diverging from there.

We would like to offer many thanks to Jane Mortimer, not only for the initial spark that ignited this novel’s beginning, but also for providing early comment and much encouragement, and one deliciously hot scene to grace the pages of our novel. We are very grateful for her generosity and enthusiasm for our story.[1]