Albus Severus/Scorpius is a slash next generation pairing in the Harry Potter fandom. Fans of the pairing defiantly, and to some inexplicably, chose the acronym ASS, or AS/S. Ass-related wordplay is sadly common.

AS/S is one of the most popular next-gen pairings, and fanworks began appearing almost immediately after the release of Deathly Hallows.

There was an uptick in interest in this pairing since the July 2016 release of the play Harry Potter and the Cursed Child, in which Albus and Scorpius are best friends. The number of works in the Albus/Scorpius AO3 tag grew at an unprecedented rate in the first month or two after the release of the script.

"... the newly established AS/S part of HP fandom has been busy building itself in the last half a year. Plots, tropes, genres most suitable for the pairing have been quickly tried and decided upon: shaking hands on the train, sorted into the same house (in which one of the pair would have to go against his family tradition) or different ‘unexpected’ houses (where both would), Potter sibling rivalry and nastiness, etc." ~Painless_j.[1] 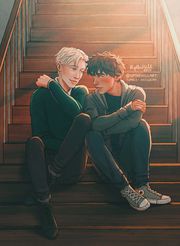