Above and Beyond (Merlin story)

Above and Beyond is a Merlin/Arthur story by lamardeuse (~1,300 words).

Summary: Merlin and Arthur face the morning after.

Author's note: "This is all nicci_mac's fault. She made a gorgeous artwork called Arthur Debauched (worksafe despite the title, unless your work does not approve of bare-chested men) the other day, and I wasn’t able to get another thing done until I’d given the boys a little morning-after story to go with it."[1]

The manip on its own has the caption: "Seeing Arthur on his knees, being crowned the Prince of Camelot did things to Merlin's breeches that several washes in very hot water would do little to remove. And how the crown stayed on Arthur's head is a mystery that can only be explained by magic!"[2] 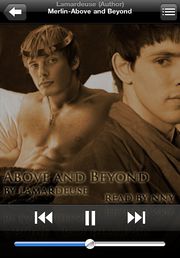 After lamardeuse posted the story, Nicci used her artwork to make a story cover that also includes Merlin.

Nny podficced the story and lamardeuse turned it into an audiobook that's available at lamardeuse's own podfic page and the Audiofic Archive. The podbook is 8:51 min long.