You may be looking for the zine RanDoM Flight, a zine.

A RanDoM Zine is "The Official Zine of RanDom Flight - the Robert Duncan McNeill Fan Club." 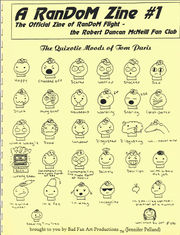 On the cover: "The Quixotic Moods of Tom Paris," and "brought to you by Bad Fan Art Productions tm (Jennifer Pelland)." It is a gen 98-page anthology.

It has art by Jackie Long, Madalena Mumford, and Jennifer Pelland.

Welcome to the first edition of the RanDoM Flight Fan Fiction Collection. This selection of stories, poems and artwork is a strictly not-for-profit celebration of Star Trek: Xbyager and her pilot, the inimitable Thomas Eugene Paris, and is dedicated to the man responsible for bringing him to life (and for the existence of this fan club), Robert Duncan McNeill.

The offerings here range from musings on why we fans find Tom Paris so fascinating, to internal monologues from the character himself, to memories from his childhood, to scenes envisioned as following on or fleshing out or branching from aired episodes. Some of the stories are humorous, some are adventurous, some are contemplative. Cats make guest appearances, as do omnipotent beings and other Star Trek characters. Some of the adventures fit into the canon of the show, some do not. That is the fun of fan fiction. It allows the imagination of the writer and the reader to explore trails the aired episodes might not be able to follow. Several club members participated in a series of vignettes edited by Maddie Mumford that show the crew's reactions to Tom's changes in "Threshold"—reactions we fans knew had to be there but which we weren't given the opportunity to see. I hope these stories do more than entertain you. I hope they make you want to take up a pen (or sit down at a keyboard) and let your own imagination wander.

This is a true collaboration of talent, brought to you by volunteers who actually do this sort of thing because we enjoy it. Some of the writers showcased herein are first time authors, others have written for years, all are enthusiastic, and the combined talent is simply amazing. Thanks go to Jennifer Pelland for copyediting and formatting, Maddie Mumford for coordinating the "Threshold" project and all of the authors and artists for sharing their work with us. It has been a joy to put this together, and I sincerely hope you enjoy the result. And if I bring this up again next year you'll know I've finally recovered from putting this one together...

See reactions and reviews for Retrovirus. 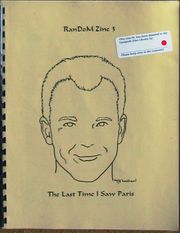 RanDoM Zine 3 was published in 2002 and contains 124 pages. On the cover: "The Last Time I Saw Paris." It was illustrated with line art by Maureen Lesher.