A Portfolio of Poetry and Portraits 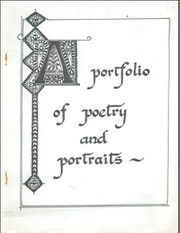 A Portfolio of Poetry and Portraits is a slash Harry and Johnny 75-page anthology of art and poetry. The front cover is by Mary Wagner. The first 45 pages are more formal poetry and art, and the next 30 pages are collages, cartoons, and various clippings, as well as a humorous story called "Flash Cube" by Dur T. Harrietta, a story called "Hustler" by Anonymous. There are also some fake LoCs, some '"from" anti-slash BNFs of the day. Sample: "I think it's disgusting, immoral, and indecent, and I need 4 more copies." "from" [name redacted].

Sample Gallery of the Extensive Art