A Ledge Between the Streams 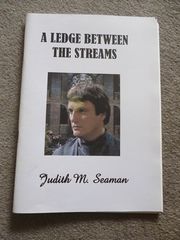 From zine agent Knightwriter: "A man called Scarton hired me, and paid me my first fee hand to hand as it's always done, so that both sides know who's hiring and who's hired. Claimed to be a distant relative, so 'distant' that he never came to the house at all. Never saw Shevron. That's what they told me his name was and I'm gullible, I believed it... for about 5 minutes...."

A Ledge Between the Streams is an Avon clubzine, and like their other zines, it is A5 (digest size) with a card cover. There is no art apart from a computer pic of Avon on the cover. The contents are typewritten and photo-reduced. Spelling and grammar are excellent apart from the occasional missing comma.

Someone once described Judith Seaman's stories as hurt/comfort without the comfort. That sums up this novel pretty well. I happen to like bleak novels, so I really enjoyed it.

The story is told from the point o f view of a professional bodyguard called Francie (and it's several pages before you work out that Francie is a man). Francie is hired to protect an isolate, a man who has shut the world out totally, cannot feed himself, and reacts to nothing that goes on around him. Avon of course: the result of Federation interrogation after Gauda Prime. Avon manages to dominate the story in spite of being effectively unconscious until nearly halfway through the book.

Someone is trying to kill Avon, and Francie is forced onto the run with Max, an android: and Avon, who is incapable of acting for himself. Vila shows up in due course, but Vila fans should take warning — this is not a story with a happy ending. This being a Judith Seaman story, it is inevitable that Blake turns out to have betrayed Avon at Gauda Prime. Although I don't buy this premise myself. I can live with it in a well written story.

How do I rate the novel overall? Well. I borrowed it off a friend, and then I went and bought my own copy. [1]