A Curious Carriage of Crystal and Cold

A Curious Carriage of Crystal and Cold is a Charles/Erik AU by Etharei. It was written for the X-Men Big Bang 2011.

"Charles, a miner from a poor village in the countryside, saves the life of Erik Lehnsherr, scion of a successful business family and the richest man on the planet Eisen. Charles is a telepath and somewhat anxious about it, while Erik abstains from relationships because the lights flicker and doors open and electronics vibrate when he gets too excited. Also features a long-suffering sister, a foul-mouthed bodyguard, and a best friend with a heart that is definitely not gold. In which there are princes, spaceships, long journeys, and old secrets uncovered. (An AU sci-fi fairytale) 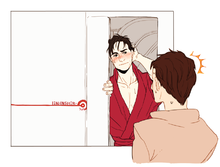 Illustration by Celectis (2011). The scene is from chapter 2.