A Crucible for Courage 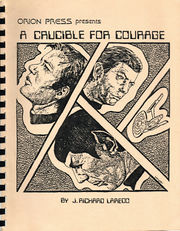 A Crucible for Courage is a gen Star Trek: TOS trilogy of novels in one 178-page zine by J. Richard Laredo. It was illustrated by Christine Myers and edited by Tim Farley and Randall Landers.

From The Trek Fan's Handbook (1990), also an ad in Datazine #44: "A trilogy... the story of Kirk's encounter with a doomsday machine, an alien named Kilroy, a Klingon named Koloth, a girl that appears to be almost angelic, and thing which calls itself Satan."

A SPECIAL MESSAGE FROM THE PUBLISHER: As of May 15th 1985, STARDATE PRESS is no longer in existence thanks to the callousness of the FASA Gaming Corporation. This company, which is licensed by Paramount Pictures Corporation to produce a Star Trek role playing game, came out with a magazine for their customers. Their magazine was given the title, STARDATE, and, the same cover format devised for STARDATE #21 by Tim Farley (which was to be used on all future issues of our publication) was employed by FASA on their first issue. After discovering this, I made an inquiry into the matter with FASA and politely asked them to change the name of their publication. They failed to respond for a number of months. Then, I was contacted by their attorney who threatened legal action if STARDATE PRESS continued to produce STARDATE, claiming that they had exclusive rights to the title and format under a license from Paramount and under a trademark with the U.S. Patent and Trademark Office.

I am simply floored.

I had been producing STARDATE since June 1979. I produced 21 issues in the six years of operation. STARDATE received several favorable reviews for various issues in Universal Translator and Datazine. STARDATE was listed in three consecutive Fiction Writer's Market Guides (1983-1985 editions). It was printed under what fans refer to as the "common law copyright," as most fan magazines are. STARDATE has over three thousand satisfied readers. And because I can not afford to sue this corporation (and they apparently can afford to sue me), I am no longer able to produce STARDATE. To quote an ancestor, "I will fight no more forever."

As of May 15th 1985, ORION PRESS will be born from the ashes of STARDATE PRESS. Our first issue, ORION #22, will be legally copyrighted, trademarked, given an ISSN number, as will all our other publications, including this trilogy penned by J. Richard Laredo, A CRUCIBLE FOR COURAGE. A new publication, due June 1985, entitled, INTERLUDE, is a novella by Celeste Sefranek, and it, too, will be equally protected. One other project due later in the summer of 1985 is a novel by Linda McInnis Goodman, entitled, THE DAY THEY ALL CAME HOME. It's one fan's sequel to STAR TREK III - THE SEARCH FOR SPOCK.

It seems to be the story of ray writing life that I be accused of ripping off others. In this trilogy, one of the first things that might come to mind is that I've ripped-off Norman Spinrad's "The Doomsday Machine." But before you go out and send me a letter doubting my ancestry, please recall that some might consider that screenplay a rip-off of the series of Berserker stories by Fred Saberhagen. All that I did was extrapolate from Spock's "What if there's another one?" and thereby consider the idea behind that remark fair game.

Another criticism might go something like this: Why isn't the second machine like the first?—in fact, it sounds very much like the Death Star from Star Wars. My response is: Why should it look like the first machine? In airless space, we are not dealing with the kinds of conditions that necessitates, say, a Soviet aircraft to resemble an American aircraft. In airless space, all that is required is for some structure that will keep whatever needs to be kept inside inside. All other considerations are entirely dependent [sic] upon what the designers want the vessel to accomplish. And to the possible complaint that I've ripped off the Death Star, all I can say is that this story has been around since 1974. While it has gone through some changes in the intervening years, those changes have only been reflections of the slight improvement in my writing craft and did not include any change in the appearance and structure of my machine.

In the second story, "A Warrior Most Mighty," evil was depicted. I'd like to say: No, I did not happen to read James Herbert's The Dark. My depiction of evil was written down at least two years before I even started (but not yet finished) that book.

Finally, as to the Kirk-robot: I have been, if not writing, at least envisioning that kind of cyborg for about twenty years. That was long before Martin Caidin wrote anything about "The Sis Million Dollar Man."

I have long ago given up trying to satisfy everyone with my Star Trek stories. I often think that I can't satisfy anyone. But I sincerely doubt that A Crucible for Courage will upset anyone anymore than others' efforts have upset me.