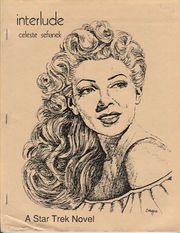 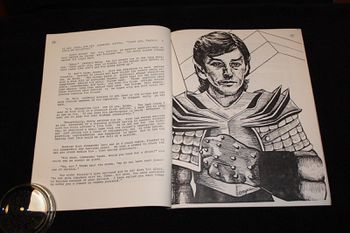 Interlude is a adult het 104-page Star Trek: TOS novel by Celeste Sefranek. It is illustrated by Christine Myers.

From an ad in Datazine #44: "A romance for Spock was just what the doctor ordered... literally!"

From the zine: it was written on a "Radio Shack TRS-80 Mark 4P using the SuperScriptit System and printed out on her letter quality printer."

I just finished reading 'Interlude,' and I can't say I cared for it very much. Not that her writing isn't technically faulty or that it wasn't a good story idea. It just, well... dragged. Anytime I get my hands on ST anything, I sit down and devour it whole. Halfway through 'Interlude,' I put it down and didn't pick it up again for two days. When I did, it was half-heartedl to say the least. I have nothing against Spock love stories, but this one is too unbelievable. Spock actually tells Kirk that Vulcans experience love-at-first-sight. It is apparently a common enough occurrence that they actually have a special name for it -- 'T'lth'la.' I can handle that Spock occasionally lets an emotion peep through, but in 'Interlude' he's so saccharine I'm amazed McCoy doesn't diagnose him for diabetes. I paid $9.00 for this zine and am slightly disgruntled about it. In my opinion, it is overpriced. [1]