4-Play & Beyond was a convention for K/S and other fannish pairs held by Kandy Fong, Donna, Carol D., and DJ.

The con was titled for these four friends, and because it was held in the 'gap year' between IDICon 3 and 4, as well as being a wink to the term as a sexual reference, "foreplay."

This con had a Kirk-look-a-like stripper perform on Saturday night, see the con reports. 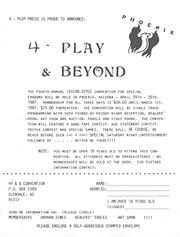 converntion flyer
From a flyer in the back of Frisky Business #4:

Remember, the more intelligent the being, the greater the need for play, and that's what this con is about - play, foreplay, afterplay, during play, and fun, fun, fun. This is the craziest, sexiest con of the year featuring same-sex relationships such as Kirk/Spock, Starsky/Hutch, Bodie/Doyle, Simon/Simon, Harry/Johnny, Mickey/Goofy, but also including Remington Steele and Laura, Scarecrow and Mrs King and even more unlikely couples as your heart desires, all in the spirit of the Houston IDICons.

The fourth annual IDICON STYLE convention for special fandoms will be held in Phoenix, AZ - April, 1987. This convention will feature a dealers' room, song tape contest, Friday Night reception, art show & auction, single track programming, video copying rooms, special Saturday nite entertainment starring the Houston W.H.I.P.S, heated swimming pool, filking & lots of surprises. You must be over 18 to attend this convention. All attendees must be pre-registered. No memberships will be sold at the door.

As many of you may already know, this was a slash-oriented con. It was small, as cons go, approximately 150 people, representing all the "/" fandons, though the majority of fandoms there here K/S, B/D, Blake's 7, and only a handful of us S/S people... Unfortunately, there was literally nothing Simon & Simon to buy in the dealer's room, but they did have a caption contest, there they posted cute photos from different shows and had space underneath for people to write witty captions. The S&S one was a photo Kandy Fong took on the set of "Lost Lady'... One of the activities was a trivia game played like "Jeopardy", and one of the categories was S&S--Robbie and I played, and though we were the resident experts of S&S, our team lost by 5 pts. There was a songtape contest Friday night and I'm delighted to say our own Betsy B won two categories: "Most Appropriate", for her S&S songtape to the song "We Are Brothers", and "Most Unusual" for a S&H tape to the song "You Can't Take That Away From He", sung by Fred Astaire. Kandy Fong had a couple of slide shows, showing pictures she took on the set of "Simon & Simon" and "Star Trek IV" and told some amusing stories of her visits there. She also showed a series of S&S slides set to the song "Come and Get It." Very funny. One of the highlights of the con was Saturday night. They loaded us on buses and took us to a nightclub in Phoenix called 'Network.' Yes, folks, you guessed it, it was a gay club. They put on quite a show, with strippers. There was one guy dressed like a cowboy, drag queens doing singing, dancing, and comedy routines. The whole show was enjoyable and entertaining... This reminds me, while our con was going on, there was another convention at our hotel at the same time: a baptist church group holding a women's retreat. Some of their activities were being held in the same building as ours—different rooms, of course—and we'd pass each other in the hall and we'd say hi and smile and I'm sure they were dying to know what our convention was about—well, Sat. nite a couple of the church women accidentally got on one of our buses and went to Network with us, went inside and watched part of the show—in shock, no doubt —then got up and left and took a cab back to the hotel. Guess they figured out what our con was about after that, yes? i have a lot of nice memories of this con. Meeting Robbie, spending hours talking with her about S&S (of course!), her stories. Riptide, H&Mc, what it's like to live in Phoenix and life in general. Also, Betsy and I going to the pool and hot tub at 1 o'clock in the morning, and finding about 10 other con attendees in the hot tub at the same time. Sleep is a rare commodity at a con. I had a wonderful time—it was an excellent convention.[1]

Marnie S: Tell 'em about the group of women who tried to get on the bus with us. (laughter)

Kandy Fong: Oh, yeah. We had hired a bus to take us over there, and then back again, and then there were some people that thought it would be fun to come with us, to go 'cause—

MS: They were Church Ladies!

KF: —they heard we were going to a club, and they thought, "Oh, you're gonna— Oh, yeah, there's entertainers. Oh how lovely! We love singers and dancers."

KF: But this wasn't the singers and dancers they were thinking of.

Interviewer: But, you never know—

We DID have fun at the Con didn't we! I didn't know anything about that bit where two of the Baptist retreat ladies got on our bus. How did you find that out? Maybe they WEREN'T shocked. Maybe they thought it was interesting but didn't want anyone lo recognize that they were there. Seems like they would have left a lot sooner. I Should ask my friend Cathy about that (Cathy is a girl I work with and imagine my surprise when I ran into her in the hotel lobby). I thought maybe she was a closet slash fan that I'd never known about but she turned out to be with the con next door.... One thing that surprised me was how many people took the 10PM bus back to the hotel rather than staying for the rest of the show which let out about midnight or earlier.[1]

Phoenix was a little too K/S for me, but I had a great time with the circle of S&S fans present (three names redacted). I'll tell ya, if the S&S people ever implemented our story idea (containing all the changes in one fell swoop), it'd definitely get a 90 share!! I don t know what was crazier, the dinner discussion, or the gay bar, in which [name redacted] and I teamed up together to brave finding a "ladies" room. (They had one, but it wasn't for ladies only!) Yes, I'd say there was definitely a much more interesting show going on backstage wouldn't you, [name redacted]'?? [1]

In the evening, large buses pulled up outside the hotel. We gaggled, squeaked, giggled, and blithely climbed on. Most of us had no idea where we were going, but our hosts were doing a fine job of their convention, and we were up for a road trip. It turned out to be a short trip to a local strip joint: male, of course. After nervous titters, and a few lascivious comments, we settled down with drooling mouths and sweaty palms to thoroughly enjoy ourselves. The stripping and dancing was fun but predictable; however, there was a young gentleman who, ah, rose to the occasion, and flourished in our enthusiastic appreciation, which was no doubt fed by his obvious enjoyment of our approval. He reminded me, in his stocky, well-built body, of James T. Kirk, right out of Yet Another K/S Zine. Mucho money was thrown and a great time was had by all.[3]

There was all the fun of panels, room groups, food and frolic as well as an art show. Speaking of.... Some of us were standing looking at a lovely pic hung on boards out in far left field, and I looked up. There was a nicely dressed woman standing beside me staring at said picture. All of us gulped nervously (after all she was in a dress and I believe, a hat), we smiled, and stammered. She was from the church group, it was Sunday, and she thoroughly approved of the picture. I ran (much more of a coward in those days), hesitant to see if she’d looked at all the art, and wanting to be out of the room when the police or TV cameras arrived. Well, actually, there was no fuss that we heard, the ladies were very polite, looked, and went on their way. That was another bullet dodged.[3]