1942: From Starship to Lancaster 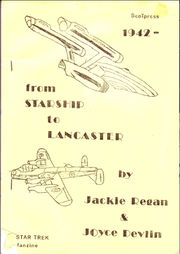 1942: From Starship to Lancaster is a gen Star Trek: TOS 63-page novel by Jackie Regan and Joyce Devlin. It has a sequel: Orcadia.

Summary from Bill Hupe's catalog: "Kirk and his crew are returned to 1939 in order to find and return to his own time Hans Wiseman, who would like to see history changed with Germany winning World War II."

From an ad in Universal Translator #22: "A top Federation scientist 'defects' to Norway, 1942, to help Nazi Germany's heavy water experiments. Kirk is assigned the task of getting him back."

Not bad. Ideas of this nature do need great care. Details of just how these people fitted in and be accepted plus how much they know are VERY sketchily worked out. We are to believe that the Guardian just fixes everything: the storyline is possible . Characters (main ones) interesting, Scotty gets a bigger role, Ann Marsh is good and I suspect Leonard McCoy would have won l'affaire coeur de l'docteur femme! [1]

A time-travel story with a difference. Kirk, Scotty and McCoy go through a Time Guardian into war-time Scotland where they join an air-force base In the guise of a Lancaster crew and hospital doctor. Their mission is to retrieve a scientist of German ancestry who has decided to go back in time and give the Germans information which will enable them to win the war. If you like Biggles books, this zine is the one for you! It is not terribly Trek, but the characterisations are very believable and the story is full of atmosphere. There are some amusing and some moving moments and it is a thoroughly good read.[2]