With Six You Get Eggroll

With Six You Get Eggroll is a Due South kidfic story by Speranza.

It was the winner of a Serious Duck Award in 2003. 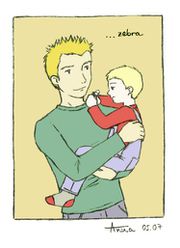 "Lost Zebra Day" is a fannish term that was used by some due South fans on Livejournal and was inspired by a scene in this story. In the story, Ray Kowalski and Benton Fraser's three-year-old adopted son is crying inconsolably until Ray figures out that he lost his toy zebra. Ray says sympathetically, "That is such a hard day.... I've had days like that.... You lose your zebra and your pictures suck, and all you wanna do is cross that day out." [1]

Another story from the queen of the dS fandom…don’t worry, there will be more. Basically, Stella and Vecchio come to Canada on their honeymoon and visit Ray and Fraser to find that they have, yes, SIX kids. Watching Ray and Fraser struggle with parenthood and the very real nature of their relationship with each other just made me feel all warm and squishy inside. Another premise that could have been disastrous if in less capable hands, but instead it became one of the more beloved fics in the fandom. [2]

Okay, if you haven't already, go read everything Speranza has ever written.

Seriously. Everything. I swear to God, you won't regret it. I put off reading "With Six You Get Eggroll"because Fraser? Ray? With six adopted kids? I mean really, who could make this work? Um.

Speranza could. And does. Amazingly. Like, it's-one-of-my-very-favorite-stories amazingly. And not just 'cause of the use of the term weltschmerz. Though that's one reason.

"Kick 'em In The Head: A Guide To Parenting." Ray Vecchio and Stella Kowalski went to Canada for honeymoon and found Fraser and Ray Kowalski living together -- with SIX children! Funny and heart-warming, one of the greatest Kids!fics I've read, in which the children are NOT so disgustingly cute that they look fake, but disgustingly cute and are REAL kids. If you don't like kids (I don't like kids, BTW), I guarantee you will fall in love with Fraser and Ray's kids by the time you finish reading. If you like kids, well, what's there to say? Not reading this fic will be the regret of your life. [4]

The basic premise is that things happened a little differently at the end of the series finale. If you cast your minds back, you may recall that the Vecchios headed south to run a bowling alley, Huey and Dewey opened a comedy club, Welsh stayed behind his desk, Thatcher became a Canadian intelligence operative, Turnbull ran for public office, Ray and Fraser went off in search of Franklin's Hand, and Francesca had six immaculate conceptions. In this slightly alternate universe, everyone swaps. Now the Duck Boys have the bowling alley, Frannie is Chicago's favourite comedienne, Meg stays at the Consulate, Turnbull of all people becomes the spy, and Welsh is the one running for Mayor. Ray and Stella decide on a Canadian adventure honeymoon, and stop off at a certain log cabin on their way out. Where they find that Fraser and Kowalsky have adopted. Six times, because "With six you get eggroll."

The writing is beautifully lyrical, and puts you at your ease despite the general air of chaos that surrounds any well-grounded due South story. And with six kids of widely varying ages, there is plenty of chaos. The kids all have different problems, some more than others, and Ray and Benton have to act as a team to deal with them. This isn't a perfect family, not by any stretch of the imagination, and the story doesn't try to disguise that. It feels real, in that way that good fiction makes you want to believe in the characters despite, or perhaps because of, their faults.

And that's it. There's no great plot, just a slice of family life. Quirky family, but could a due South family be anything else? It's still one of the most loving and inspiring stories I've read, so it's my pleasure to pass it on to you now. [5]

I used to have this rule, this rule where I never read kid!fics. I would never touch an mpreg, not even in crack!fic territory, and the idea of my favourite characters adopting mountains of children and turning into house husbands used to make me wince in pain. So when I say that this story stars Benton, RayK, Stella, RayV, Sarah, Holly, Sam, Andy, Eddie, and Robbie, I say it with great pain in my heart. Because I really like it. Its Fraser and Kowalski living up in the arctic circle with six adopted disfunctional kids, and it's great. Funny and well written and it works. Much though it pains me to say it. [6]

The kid!fic to beat all other kid!fics. Speranza spun the dial on the epilogues of all the due South characters, so Fraser and Ray K end up with the six kids... but this is not your average kidfic. The kids are very real (from a troubled teen to a non-stop fussy toddler), and Ray and Fraser are perfectly characterized harried parents doing their best (and still remaining true to themselves). [7]

Note: If you follow this link here you can view another version of the story. You can see Speranza's sense of humor coming out in this version. This one takes a little longer to load. Same fic, just with some picture enhancements. None of which are really BF/RK. This is a little AU or maybe alot, you judge. I just love this story. It is way wacky, but it just pulls you along and sucks you in. In her story notes Speranza gave the best description I can think of for this story. She took all the endings in the Epilogue of CotW and just scrambled them all up. Gave everyone someone else's ending. The result is quite unique, I must admit. It's pretty easy to follow even with the old switcheroo. I just love Ray and Fraser in this. I won't tell you who got which ending, don't want to spoil it for you. You'll catch on soon enough. I just love Speranza's stories. We were talking about her work on a list the other day. It's easy to sum up what was said about her, we were quite succinct, "Mmmm, Speranza". This one is just as fabulous as the rest of her stories. It's pretty light on the sex, but I didn't mind one bit. I'm of the category of readers who thinks a story doesn't always have to have sex in it for it to be slash. The love is enough sometimes, a kiss is enough. This one has some really beautiful sweet moments and some angsty ones for flavor. I really loved this one. After I finished it I wanted to turn right around and read it all over again. It's definitely going to be one of my re-reads. Those stories I always turn to when I can't find anything new I like and am in the mood for something specific that this one falls into. Give it a try, you might just love it too. [8]

This is my absolute favorite among Speranza's fics. I adore this fic. Oddly, I think this is one of those fics that turns a lot of people away. People seem to either love it or they won't read it. I think the main reason is it's a "kid fic" and some people are put off by that. It's the best damn kid fic I've ever read. Speranza puts her own spin on it. She took the epilogue to the season finale and switched around all the scenarios of how everyone's lives turned out. With Fraser and RayK ending up with the 6 kids through immaculate conception (adoption). It's not an easy life for them, but one they are damn happy with. We see this life through the eyes of RayV and Stella when they come to visit. Learning how it all came about as they do. She weaves a wonderful tale with some great kids that you just want to take home and adopt. (I think Ray would kick you in the head for thinking it though.) This is a terrific fic, one you shouldn't miss. So off with you. Go read it. [9]

Kowalski and Fraser have set up home in the frozen North. By various means, they have acquired six kids, hence the title. Stella and Vecchio come for a visit. Wackiness ensues. Tremendous fun, but some interesting insights into the basic human psychology of growing up and interpersonal rivalry (not all of it sibling) too. Wonderfully long and detailed AU epilogue to the series, which simultaneously inverts and is much better than the canon one. [10]