Will You Welcome Me? 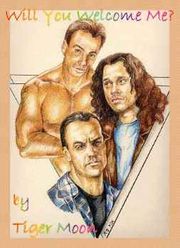 Will You Welcome Me? is a 195-page slash Sentinel novel by Tiger Moon. Color cover and interior b/w art by K9.

From the distributor, "Jim Ellison and Greg Maxwell (original character) are lovers, raising Blair Sandburg's daughter Lucy. When Blair comes back into Jim's life unexpectedly and disaster strikes, Greg finds he cannot stand in the way of Sentinel and Guide."

This AU novel is set in 2003. To be honest, I'm not entirely sure I'd say this is an "AU". Things are a little different, of course, but basically Jim is a cop, Simon is his boss, etc. But that's what it says in the 'zine so we'll go with that! However, for those of you totally put off by AU's, I don't really think you'd have to worry about that here. JMHO, of course.

Blair left Jim and Cascade a few years before to the start of the story to pursue his academic career. As the story opens, Jim is involved with a man named Greg. While visiting the beach Jim runs into a woman and a little girl. The child turns out to be Blair's daughter. The woman explains that Blair has died and his wishes were that the little girl be taken to Jim to raise as his own. So begins the story....

For those concerned about Jim & Blair separation, Blair returns to Cascade on page 35! Of course, they don't immediately hop into bed together. There's some conflict, jealousies, etc. between all four individuals. Tiger Moon takes us on their journey as they learn the ins and outs of living and loving each other and becoming a true family.

If you aren't familiar with K9's art, you are in for a treat. There are several full page b/w illos that are just stunning! Quite a treat for the visual sensualist! [1]

When the story begins, Blair has been gone for around three years, and Jim is in an established relationship (although they do not live together) with Greg Maxwell, an FBI Profiler. Now Greg is a great character. TM does a good job at fleshing out Greg as an OC and if you like stories with OCs, you will like this story.'

Two pages into the zine Jim suddenly becomes the guardian of Blair's 7 year old daughter, Lucy, when Blair is believed killed overseas by a terrorist bomb. What follows is a very hard time for Jim. He was in love with Blair when Blair left, but never told him.

This is a good read. Tiger Moon is a good writer and there are some very tense moments. When everyone finally gets over Blair being dead and settle down, Jim and Greg and Lucy have a great life. You see all the Major Crime guys, and Naomi. Jim and Greg committed to each other and both officially adopted Lucy--and then, two years after he is believed dead, Blair shows up on their doorstep.

My biggest complaint is that it is a Mary Sue...okay, a Bobbie Sue *grin*. Greg is a Mary Sue. He is just about perfect. He is handsome, intelligent, witty, kind, etc, ad. nasuem. He saves Jim from going crazy when Blair leaves, Jim considers Greg his mate, and when Blair comes back and Greg starts to suspect that Jim still has feelings for Blair, Greg (after some initial resistance and lots of angst and actually leaving Jim) sells a doubting Jim and Blair on the idea of a triad, a threesome. Greg constantly saves the day. He nudges Jim and Blair into their first kiss, their first sex. Greg makes Jim a better man, sacrifices his exclusive relationship with Jim to include Blair--i.e.: a Mary Sue.

"As he (Blair) watched Greg and Jim it suddenly dawned on him, he could finally put into words the differences he'd seen in Jim. The Sentinel had learned to play.

At first Blair had thought it was Lucy and her influence on Jim's life, but having lived with Jim and Greg and seeing their relationship, he knew it was Greg and the relationship they (Jim and Greg) had together. The older man (Greg) offered unconditional love and had a certain amount of playfulness he was sure Jim would have just given in to at first. But as he watched Greg, he knew Jim had long since quit giving in and began to enjoy "playing" with Greg as well. Greg loved Jim for the man first and foremost, The Sentinel and the cop came second in Greg's mind.

Blair felt even more honored than before to be included in their relationship."

My second biggest complaint is Blair and how he is treated in this zine. I like Blair. I like Blair the TV character and the Blair that Jim loves (usually). I like Francesca's gutsy Blair and I like femBlairs, I like most all Blairs. I tried to like this Blair, but honestly, I didn't think there was enough insight into him to fall for. This Blair constantly and inadvertently came off as the bad-guy, the spoiler. For example, Lucy his daughter is happy as can be with two loving Dads and here comes Blair to maybe take her away from the first real home she is old enough to remember. Although it is eventually resolved, TM does not let the reader see HOW it is resolved. We are very VERY distant observers when it comes to Blair and Lucy and their coming to terms with each other. Even in the relationship between the three men, Blair and Jim's relationship plays second fiddle to Jim's and Greg's. And Blair's relationship with both men comes off as shallow, to me. Especially when you compare it to Jim and Greg's relationship.

The zine has a happy ending, all three are together and committed and all ends well. And it kept me reading all the way through. But I was left feeling vaguely unsatisfied and disappointed. [2]