Venkthology is a gen anthology of fiction, focusing and starring Peter Venkman of Real Ghostbusters fame.

Venkthology 1 was published in 2015 and contains 76 pages. Veering away from hurt/comfort genres that Real Ghostbusters fandom is notorious for, the zine focuses on Peter as a cartoon character and features talent from newer authors and fan artists such as Babs, Jen Seng, and Spinner Atropos, as well as older, non h/c stories from older authors. 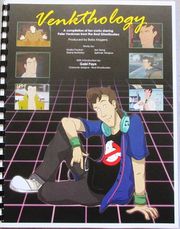 The publication also includes an introduction from Gabi Payn, who designed Peter and the other characters in 1986 for the Real Ghostbusters cartoon. In addition there are also original and updated official model sheets, and Peter's chapter from the 1986 Writer's Bible, compiled by J Michael Stracynski, including input on the character from Harold Ramis.