Velvet Deceptions is a Kirk/Spock story by Roberta Haga. 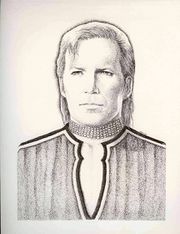 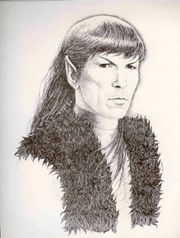 It was published in the print zine First Time #20.

"A/U: Kirk, a ranger in Starfleet, is assigned to transport a prince of Vulcan to his marriage but is surprised by an adult Vulcan he thinks is there as “the kidʼs” guard."

"A shadow slipped through the moonlit night, making its way soundlessly through extensive and well- manicured gardens to a large, ornate verandah. There was no reason to worry about its being seen; still, the shadow entered through a side door to slip unnoticed into the huge, three-story house. "Where the hell have you been?" came the instant greeting upon the female's recognition of her caller. Captain James Kirk chuckled, bent to place a kiss on one perfumed shoulder, then pulled one hand across the woman's flat abdomen as he stepped into her spacious four-room suite. "Is that any way to greet your favorite lay?"

This story was nearly beyond the scope of my rating scale! It is excellently written with complex and surprising contents. A fairy-tale from The Thousand and One Nights. Please, nobody ask me how many hankies I needed.... [1]

Surak nomination? There are a lot to pick from in this zine. VELVET DECEPTIONS: Alternate universe characters that go with the glorious covers and while not the traditional Kirk and Spock, Ms. Haga manages to keep them completely within my ideas of their character. Long haired, and wild, Kirk is still James Kirk and you will love this story. Hot and steamy! [2]

I consider this novella to be one of the very best alternate universe stories written, with real plot original characters, and a compelling characterization of our guys, a recognizable one. I've read the story several times, and I've always tried to analyze it and understand why it works so well, why when Kirk and Spock are parted their emotional devastation is so real. But I usually get so caught up in the story that the analysis goes out the window and I just enjoy. I especially like the fact that this is a long story. The author doesn't cut anything short, she gives each situation and emotion its due. I would say that I think Velvet Deceptions is Robbi's best story, except that I also agree with [D B's] favorable review of her Crystal Clear novel [3] that appeared last month. It's a toss up between those two.

Velvet Deceptions is a little short on the reasonableness of some of the pivotal plot points, such as Kirk not questioning that he never meets his young passenger, and that Sarek has actually arranged for Kirk and Spock to be together, hoping that something would occur between them to save Spock from a marriage he doesn't want and to which he is not suited. That mars the ending for me. But balancing that is genuine richness in the rest of the story, great immediacy in the scenes when they are camping and finally get together, and excellent portrayals of the aliens, (the bad guys who kidnap Spock). and other minor characters.

I especially like two parts. When Spock has gone back to get married, and Kirk returns to his lady friend. Kirk and friend are in bed together, and he sort of automatically reaches between her legs, looking for we-know-what without thinking. Then he breaks down and cries. What a terrific scene!

And then, when Kirk visits Spock on the night before his wedding. I live through those hours with them, feeling the minutes tick down to the time when they will be parted forever It's just like Kirk, of course, to brashly force his way into Sarek's home, claiming his right to be with Spock up until the last minute. I think the author did a superlative job in conveying genuine emotions here. [4]

I'm not particularly fond of AU stories, including the Mirror universe, but Roberta's characters are so wonderful that I may change my mind. I'm also more of a 'Kirk' fan than Spock but I absolutely fell in love with this Spock. Anyone who doesn't should read it again. This Kirk is a good strong personality also, and very likable. [5]

When is AU not quite AU? When the characters are still Kirk and Spock but they've taken different paths than we're accustomed to. In this instance Kirk is with Starfleet, but in a covert position: a ranger.

His current assignment, to escort Sarek's son to a place of safety, takes a decidedly interesting turn. He believes Sarek's son to be a child and immediately mistakes the tall, lean and remarkably attractive Vulcan as a bodyguard. A misconception that Spock unexpectedly decides to promulgate.

One must suspend disbelief to accept that for many weeks aboard a scoutship, Kirknever catches on to the fact there is no third passenger, but what the heck! The trip's too enjoyable to worry about the little stuff.

This author describes a naked Kirk better with words than you would think possible! Gads! You just cant help salivating....

And maybe Spock's just a little too innocent for an intelligent being 27 years of age. But again, it's such an appealing, seductive innocence that you simply don't feel the need to be critical. Just imagine sharing the sensations of Spock's very first erection. Wow!

There was one disappointment. Ms. Haga writes half of the most loving, mind spinning sexual encounter! Notice I said half? She brings Kirk to climax and leaves out what could have been a mind-boggling first time for Spock. We're only told by the morning- after scene that it went both ways. What an incredible missed opportunity for someone clearly up to the task.

Well structured, this is an adventure worth reading even without the romance that touches every moment and is the driving force behind each decision. At one point both men exercise the option of putting their own lifeat risk to save the other. While this doesn't surprise us, it surprises them. When finally the truth is out, the question becomes: is the love strong enough to surpass centuries of Vulcan tradition? The answer doesn't come easily.

It is devastating and captivating to see Kirk come to Spock on the eve of the Vulcan's long-ordained wedding. Sarek is there to forbid them these last cherished moments together, prompting not the expected obedience, but Spock's first and probably last act of open defiance. The description of Spock on this momentous occasion is unforgettable: Spock was resplendent in black silk trousers, the bottoms fastened snugly around his ankles with the gold straps from his sandals. The robe, of deep purple satin and decorated with elaborate symbols embroidered in silver and green, covered Spock's arms and legs, but had been left untied to reveal his bare chest. Kirk's eyes automatically followed that familiar line of hair leading down to the navel and beyond. A direction he had traveled often and couldn't wait to do so again.... What is it that makes an impossible love ever the fiercest, most heart wrenching kind? Believing their love to be exactly that, the two spend their last night together. The last night they will ever see one another—in a garden Spock has created to replicate the site of their first loving. He declares no living soul will ever occupy this special place—only one lonely Vulcan and one treasured memory. The most classic of tragedies, and so deftly told.

The end failed for me in one way. It didn't seem feasible that Sarek had engineered this pairing from the start. I could see no reason for this contrivance and it robbed the "final" night of its impact. The happy ever after was ok, but a little too easy. I liked best the desperation of Kirk and Spock accepting there was no tomorrow for them. The story would have had more lasting significance for me had fate been the only player. [6]

What an engrossing AU novella! Kirk is a Captain, but of the ranger corps – something we learn little of but that is perfectly acceptable as there are more important things to learn. In the deep recesses of my memory were sparks of this story from a previous reading, no doubt years ago. I remembered the new secondary character, Lair. Her role as Kirk’s contact was performed under the cover of her first profession: prostitute. A shady lady only in that she helped Starfleet with various subterfuges, she was otherwise quite noble and caring. Lair was most likeable.

Kirk’s called to a duty he immediately resents, that of transporting and protecting the son and heir of Sarek of Vulcan. Babysitting is not for this ranger, so he doesn’t complain when Sarek’s son comes aboard unseen and with his own bodyguard. It is with the tall, dark and handsome bodyguard that Kirk becomes more and more infatuated as their enforced closeness continues. This is a marvelous falling in love story! Slow and tender, with a very innocent if duplicitous Spock. For, you see, there is no bodyguard. The handsome and enticing stranger is actually Spock. This deception continues for a long time and defies credibility occasionally, but it does not detract from the fact that Kirk and Spock are doing what nature meant them to do: falling head over heels in love. Kirk’s character is wonderfully confused by what is happening to him. In some ways, Spock understands his heart better, but he is such an innocent. Along with this, you need to know there is much adventure, intrigue and suspense complete with Klingons and Gorns.

The most memorable part of the novella for me is when Spock has revealed who he really is and along with that revelation the fact that he and Kirk have no future, as he is bound to the daughter of Vulcan’s second greatest clan. It is their upcoming marriage that will unify the planet. This is heartbreaking for Kirk and for the reader. Spock accepts it in the way that he has been taught to accept all things unpleasant and undesired in his life, and yet he readily admits that from the moment he is estranged from Kirk he will but exist. Their final night together is filled with equal amounts of anguish, passion and tenderness. In the end, however, there is yet one more deception to be revealed. You will like it. [7]

AU. Spy captain James Kirk takes a Vulcan prince he is charged to protect aboard his vessel, and falls in love with the man he believes to be the royal teen's bodyguard. A fantastic story with original and well-handled plot, great writing and nice characterization both for OCs and the leads. Loved the concept of Kirk's necklace. Some of the thrill of the story was somewhat spoiled for me with the revelations at the end, but not enough to detract from the overall enjoyment. [8]