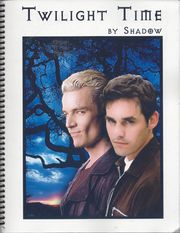 Twilight Time is a slash 276-page novel by Shadow. It contains 28 chapters and an epilogue, plus a short story at the end called "Fight or Flight."

The cover and interior art is by Lilac.

From the publisher: "Carefree donut boy. Spike: Uncaring black sheep of the Scoobies. A chance meeting in one of Sunnydale's cemeteries gives them a glimpse behind the masks they wear, and romance is in the air . . . but a new dark is rising in Sunnydale, and Spike and Xander find themselves caught a web of prophecy, danger, secrets, love, and death, where friends can become enemies and enemies can become saviors, nothing is ever quite what it seems, and love may be their only weapon." [1]

Good old Spike/Xander nummyness from the Buffy the Vampire Slayer fandom. I have to admit that this one is a guilty pleasure, a very guilty one. This was an online in progress story for years before the author finished it and published it in zine format. I found this one back in the dawn of S/X, back when there wasn't much being written and this one stood head and shoulders above most. Since then I've come to recognize the pitfalls and clichés in S/X writing and I'm honest enough to say that this story hits nearly every one of them. But I still love it anyway. It's probably just nostalgia, being reminded of the "good old days" of the beginning of S/X before the fandom was overwhelmed by fanpoodles and badfic, but whatever it is, I went ahead and bought this zine, already knowing its faults. Let's be blunt about this: Buffy is OOC (Bitchy!Buffy to the extreme), the cliché of Victim!Xander is played for everything its worth and then some, Spike calls Xander "pet" every other sentence, Xander's friends are clueless jerks for the first half of the story and way too understanding about him and Spike for the second half, his parents are abusive Neanderthals and the requisite sexual abuse rears its head. This story also deviates from canon drastically. On the other hand, the author stays in one point of view through nearly three hundred pages and that gets high points from me. She also knows a comma from a semi-colon and how to use them. Her grammar is good and the story itself is very good. She knows how to tell a tale. Good layout, decent format, and overall this was just worth buying for me. Someone new into the fandom might not agree, but like I said, I was hooked on this one early and it's an extremely guilty pleasure. [2]