Tri*Way is a gen anthology. Both are 140 pages and both contain original fiction and mixed media based on: Indiana Jones, Doctor Who, Star Trek and others.

In Datazine #38, there was a proposed zine by Leah McGrew: "I'm looked for responses to a short run of stories from my original universe, The M.A.G.I. Files, which have been printed partly in "Tri*Way" and in a couple of other places. There will also be new ones, by me, as well as by C. Crouch and possibly others. Some of these stories have crossover aspects such as Man from U.N.C.L.E. and possibly others -- maybe even Batman! Plans are nebulous, obviously, as yet, but depending on response (amount, frequency, and swiftness) printing date might be anywhere from 8 months to 1987. Business sized SASE please."

Tri*Way 1 was published in 1982. The front cover and frontispiece is by CL Crouch, the inside back cover by Crouch and Leah, the back cover by John Barrow. 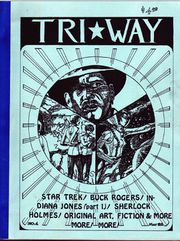 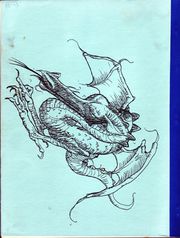 back cover of issue #1, John Barrow 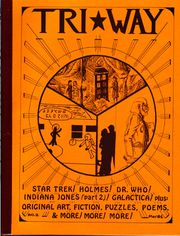 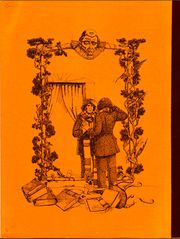 back cover of issue #2, Crouch "The Mirror"

Tri*Way 2 was published in April 1984. All art is by Crouch unless otherwise noted.