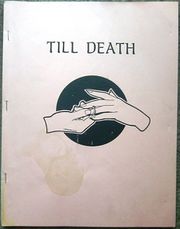 Till Death is a het Simon and Simon 167-page novel by Christine Jeffords.

The zine was first proposed in late 1985, with an ad in Details at 11 #11 asking for interested fans to send an SASE. The author, at that time, was hoping for a September 1986 publishing debut.

Summary from a publisher's ad in Pop Stand Express #10: "When you watch 'The List,' do you ever wonder what would have happened if A.J. and Amanda had met in a way that didn't threaten her anonymity? This full-length alternate universe novel presents a possible answer."

From an ad in GAZ: "An Alternate Universe novel that explains what might have happened if A.J. had met Amanda McKay in a way that didn't threaten her anonymity. Amanda's presence in A.J.'s life makes for definite differences in both bothers experiences -- but there are still people looking for her."

Summary from a distributor, Agent With Style: "An alternate universe novel based on the episode, 'The List,' in which a woman A.J. Simon falls in love with must disappear because she's in the Witness Relocation Program and has been discovered by those she's hiding from. But what if Amanda hadn't had reason to fear that her protected status would be exposed? With Hi Elton's death and the disappearance of his files, A.J. and his love are free to marry, and they do. The years that follow bring many changes to the Simons' lives. But fate isn't done with Amanda yet."