The Weaver is a K/S story by Ann Guise, a pseud. 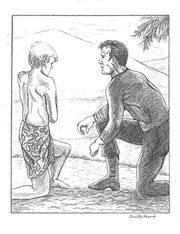 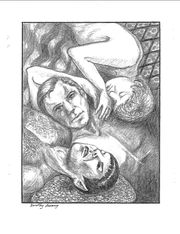 Dorothy Laoang for this story, portrays Kirk, Nusdat, and Spock

It was published in the print zine Amazing Grace #2.

Despite the pseudonym, this story is identifiable as the work of one of the great writers of fandom. Imagine aired Trek written by the very finest science fiction authors, free of the constraints of commercial television, and including explicit K/S. Then try to imagine something even better and you may have an idea how good this story is.

As it begins, Kirk and Spock are bondmates and their relationship has unleashed the human unconscious that Spock has never acknowledged. The consequences are devastating. Spock's raw emotions are transmitted to Kirk through their bond, causing Kirk severe stress with debilitating psychosomatic symptoms. McCoy worries about the impact on Kirk's ability to command.

After this introduction, the Enterprise undertakes to obtain the antidote for a plague, a rare pigment called "origin," which exists only on a dying, cooling world named Twilight. The bridge crew plus McCoy and Chapel take a shuttlecraft to Twilight and a city built by its inhabitants, the Topani, in a marine trench heated by a "core tap" at the bottom of what once was an ocean but now is a breathtaking "architecture of ice."

McCoy wonders how the Topani can "look extinction in the eye and not give a damn"; the answer appears to be "inweaving," in which members of the community become psychically connected in a bond beyond death. The weavers, who are hermaphrodites, collect and dye cloth with origin, which enhances the ability of those wearing the cloth to share emotion with others; they also "inweave" members of the community by joining sexually with them. In short they "weave" the fabric of community just as they weave cloth.

The mission almost ends in disaster after a "cultural misunderstanding" in which I suspect the author of wry commentary on the action-adventure formula of TV science fiction. Kirk and the master weaver, Nusdat, resolve the misunderstanding and Nusdat offers Kirk his entire supply of origin to save the plague-stricken world. Nusdat expresses the desire of the Topani to be "inwoven" with the Enterprise visitors but does not make this a quU pro quo for his gift.

Kirk believes that the Topanis' gift requires the Federation to give something of egual importance in return. He does not order the crew to participate in the inweaving, but reminds them that "If we leave now, accepting his gift and giving nothing in return, we will, to my mind, have failed utterly in representing the values of the Federation," All except Spock volunteer, in a scene I'll get back to.

Spock does agree finally, and the inweaving becomes the solution to his dilemma: a healing connection with others in which the fear and anger of his "lost human child" are dissipated by sexual sharing and the others' unconditional acceptance.

The story has multiple levels of meaning: social, psychological and allegorical/symbolic. Ultimately it is about reintegration of the divided and alienated self. Three characters in the story-Spock, the first weaver, and Hans Christian Andersen's mermaid (in a Kirkish version of the tale told to Nusdat and Spock) share the status of "outcasts," forced by intolerance to suppress half their dual natures. (In this author's writings I've noticed that her parallels tend to come in threes -- a number with Jungian archetypal resonance.) The symbolism is enhanced by the play on words of origin [equals] origin and dye-die (in its Elizabethan senses). Origin is the name of a Gnostic philosopher who addressed the dualism of psyche and soma.

The author has mastered the science fiction craft of creating alien worlds, and her story is alive with good old-fashioned science fiction "sensawunda." Her characterizations, especially those of Kirk and McCoy, are true to aired Trek, only more so-her characters have even more brilliance, depth, integrity, competence and sophistication than they had on the screen. In the briefing room before the beamdown to the inweaving, the crew reflect about Kirk: "Brilliance as a tactician, charm, intelligence, unequaled skill as an administrator were not the core of him: Character was. Yes! A scene in which Spock sees the images and literary associations in Kirk's mind during orgasm is wonderful.

This dramatic integration is enhanced by the scene in the briefing room with which the search for the origin begins. Rather than introducing the mission-of-the-week in narrative, the author does it in a scene that shows us the richness of the lovers' working life on the Enterprise.

The author's trademark dialogue between Kirk and McCoy is as rapier-sharp as ever. Throughout the story, the depth and acuity of her prose is fully equal to the complexity and range of the story and its numinous theme and setting.

However, like some of this author's other work, this story reminds me of a canvas that is not completely finished: Some sections are completed in exquisite detail, others are merely sketched in. This is not necessarily a fatal criticism-even masterpieces are sometimes left unfinished. (Consider, for example, the pinnacle of Mozart's work, the Requiem. Of course. Mozart had a pretty good excuse for leaving the work unfinished, and his widow paid someone else to do the orchestration from the composer's rough sketches. I don't want a Sussmayer to finish this story; I just wish the author had finished it.)

The impact on Kirk of Spock's troubled "human unconscious" is less developed than it should be -- it's shown as a crisis that is brewing, but not ripe. After a tantalizing sequence involving a beautiful woman ruler who visits the Enterprise, McCoy worries about "Handing parties, secret missions, Klingons." if Spock's unconscious had this reaction to the possibility of losing Kirk sexually, how was it going to react to the risks Kirk took in battle?" Surely this would have happened already. We don't know how long the relationship has been established, but in a scene with Nusdat, Kirk thinks about how he might have acted before Spock, "a year ago." Has the Enterprise been making milk runs for a year?

Similarly, the "inweaving" is a wonderful concept, but that's all it is, a concept. Its meaning to the Topani is barely sketched out. We get a glimpse of it only toward the end, in the inweaving of Kirk, Spock and Nusdat, after the group inweaving is over—too little, too late.

Lack of development of the story's two major dramatic components, Spock's problem and the inweaving, weakens the story's dramatic structure and robs the pivotal scene in the briefing room in which the crew decides to go back to the planet and be inwoven of the impact it should have had. Without understanding what the inweaving is all about, we can't appreciate what is at stake for the Topani, for the Enterprise officers, and for Spock. The scene in the briefing room is also quite sketchy.

Since Spock's problem is not developed enough for Spock to know that he must resolve it or lose Kirk, the author is forced to take a dramatic shortcut to make him participate in the inweaving. She has Kirk confront Spock a la "This Side of Paradise," evoking a similarly violent response which reveals to Spock that he is out of control and leads in turn to his "total and utter capitulation" to Kirk as the price of keeping him.

This is a powerful scene, but I'm not totally convinced that it belongs in this story. The element of force and "capitulation" is discordant in this story about wholeness and connection, and besides, we know that therapy (which the inweaving is, for Spock) is effective only when the patient is willing. But the biggest weakness is that it's simply a rush job. (In this scene, the author's otherwise finely-crafted prose tilts into excess, e.g. "Spock's hand throbbed as he looked at the ruin of his life." Aw, c'mon, Spock's life is not "ruined." I would agree, however, that he may be about to remake his life

McCoy's hypotheses about Spock's conception and rift with Sarek had me hooked and wanting to know the answers, but went off on a tangent (Vulcan population growth, or lack thereof) which didn't seem to belong in this story, and McCoy's ideas were not followed up.

In the wonderful story-telling scene toward the end, there's a sly wink at K/S fandom in the pre-reform love-slave story told by Spock, which Kirk 'half suspected was fictional-fair Vulcan pleasure slaves!" Indeed. The story is enhanced by Dorothy Laoang's professional-quality art, especially the scene of Kirk and Nusdat kneeling with its powerful body language.

In sum, this is a rich and rewarding story. May this writer remain with us in whatever "guise" she chooses to adopt. [1]