The Unknown Quantity is a Kirk/Spock story by Rachel Abbot. 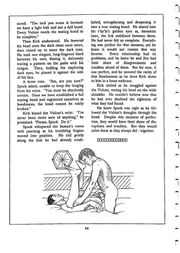 "While totally drunk, Kirk kisses Spock but is unsure of a future together when Spock tells him that although he would enjoy touching Kirk, he would only become aroused during pon farr."

Something very insightful is shown by this author— an exceptionally intuitiveand inventive reason for Kirk's continued womanizing even after we're all aware he's becoming more and more enamored of that tall handsome gent in science blue. According to Ms. Abbott, since the first time he heard whispers about himself and Spock, Kirkhas feared 'Fleet might decide to transfer Spock, so he has "begun to be flamboyant in his pursuit of women".

Aside from this unique observation, this account shows Kirk's first overture to Spock as a result of a drinking bout— not my favorite scenario. Nor was I too pleased with Kirk's morning-after decision to do everything he could to pretend it meant nothing.

Spock, as you might imagine, is hurt, and his pain is clearly felt. Still, Spock is the strong one here, appearing to Kirk in appealing Vulcan garb and confronting him about his motivations. There continue to be problems—Spock cannot respond outside of pon farr —but does a creditable job of turning the human to jelly. [1]

[the fan comments on What Fools These Mortals Be and writes] ... a cute idea, but one that could be considerably longer. It read more like an outline than a fleshed-out story. An interesting idea, but one that could have used more work. The same could be said for THE UNKNOWN QUANTITY. However, I would like to say that this story represents a major step in improvement in Ms. Abbott's work. The story reads smoothly, dealing with a misunderstanding over a woman, and a drunken kiss between Kirk and Spock. Again, an old idea, but it was done well enough, with good dialogue and narrative throughout. [2]