The U.N.C.L.E. Chronicles is a gen 150-page anthology. It is subtitled, Cousins, Friends & Brothers. 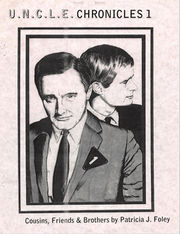 It contains five stories by Patricia J. Foley (three of them from Wonderland Series, two poems by Jane Mailander, and art by Mike Cole (one illo, and the cover).

This zine was the winner of a 1999 Fan Q, and while it was titled as the first in a series, it was the only one published.

This zine was dedicated to Jan Davies.

A fan described it:

Pat F.'s series of interrelated gen (or, IMO, pre-slash) stories tracing IK's arrival at U.N.C.L.E. and his strengthening relationship with NS over the years. Complex and well written. [1]

Two years ago, Jan Davies and I had a discussion about U.N.C.L.E. fiction. That year, quite a few new "slash" U.N.C.L.E. zines were published, slash having an influx of new writers, but there was no associated preponderance of "gen" U.N.C.L.E. fiction from new or established writers. Also, Jan noted, many gen readers and writers didn't read slash and vice versa. Going about her role as chief goad to all the U.N.C.L.E. writers in fandom, she decided to do her part to reverse that trend. She was going to do a gen zine, called Declassified Affairs 1, that would be heavy on relationship, hoping it would help bridge the gap between tfie two genres and get fans of both types to read it. She asked me if I would do a story for a zine with such a theme. Confident that I had two years to write one, I promptly agreed.

Come January 1998, two months before the deadline, I decided I had better get down to work. Within a couple of weeks I had started one story, then a second, then a third, and all of them were giving me immense grief. I labored and struggled with them, going from one to the next, trying to make at least one come out, before it finally hit me that I was writing one whole story, not three separate ones, and that they had to be merged together. With that, "Partners" was born.

It was a difficult labor. I usually write fairly easily; sometimes as much as twenty single-spaced pages a day when I am going strong, but I can't compare anything to the agony of writing "Partners" except maybe childbirth. I spent most every free moment for six weeks at the computer, struggling with scene after scene, complaining bitterly to poor Jan all the while.

And the story kept growing. Jan kept calling me and worriedly asking me for the page counts, and I kept giving them to her; higher counts each time. Still I was assured all was well, the zine would swell to accommodate it. Finally, one week overdue, I was done. I ran a spell check and managed to proofread almost half of it before I had to turn it in. Rough draft didn't even begin to describe it. But I was well past the deadline. I emailed it to Jan on February 28, and collapsed in relief. I was done. I vowed I would not write another line for at least six months.

About an hour or so later I got a call from Paula Smith. The story was wonderful, she said, she wanted to publish it. Needless to say, I was puzzled, I hadn't sent it to Paula.

"But Jan is publishing it."

"It won't fit in her zine." Paula explained that Jan had received so many other oversized stories from equally prolific writers by the time I finally finished the last scene, that "Partners" simply didn't fit. But, she said, she had long wanted to bring it out a collection of my work, and with a big, brand-new story available, the opportunity was irresistible.

"But you haven't read the story," I protested, feeling as if the earth had dropped out from under my feet.

Paula assured me that Jan had already told her it was wonderful.

"But Jan hasn't read it," I protested again, feeling as if I were in some kind of Alice in Wonderland universe. "She only got it an hour ago; she couldn't possibly have read it all so quickly."

"What she has read of it is wonderful," Paula asserted.

"You are all nuts," I said. "You haven't read it and Jan hasn't read it and yet you want to publish it. I haven't even read it! You're buying a pig in a poke; you don't even know if the story has an ending!"

They trusted me, she said. "I've read your stuff. It's good."

I agreed to email the story to her, to read. But the story was Jan's, I insisted. I had written it for Jan's zine specifically, tailored it to her theme. She had first claim to it. Truthfully, I wanted it in Declassified Affairs, and I couldn't quite imagine that it couldn't somehow be squeezed in. But the word came back from Jan; she and Marion McChesney had repeatedly tried to format the zine down to workable size but "Partners" was just too big. They were absolutely desolate, but the story would have to be published elsewhere.

But they wanted an excerpt.

That weekend my head was in a fog, caused by sitting too long before a computer screen and living in an U.N.C.L.E. universe. I couldn't believe that the story I had slaved over wasn't going to be in Declassified Affairs. For two years I had heard about this zine, liked the idea, was pleased to be part of it and now I wasn't going to be in it. I wanted to be in it with a story, not an excerpt. On the other hand, I had nothing else to give Jan, and the thought of more writing was agonizing. But not as agonizing as missing the Declassified boat. I finally wrung a promise from Jan that she would hold the zine open for me for another week. If I could get her something, something smaller, by the next weekend, she would use that' instead of the excerpt.

I started work on a story that I had begun thinking about on the Metro, a spoof of Dickens' A Christmas Carol. All weekend long I ran tapes of various versions of the movie for inspiration, pulled out the book from my set of Dickens, and wrote and wrote. At the end, I had "Alternate Endings," and I was going to be in Declassified Affairs after all.

Then I had to deal with "Partners." Paula was going full speed ahead with publishing a collection of my past stories in my universe, all except "Alternate Endings," which Jan refused to give up for co-publication. But I wanted this zine to have at least two new stories in it, besides the three that were being reprinted, and so I sat down again in March and April, and like a punch-drunk fighter wrote the prequel to "Partners," which is entitled "Intrinsic Natures." That too was agony. By the end of April I had written more than a hundred pages on top of "Partners" and edited a hundred more. I was more than ready to never, ever write another line again.

See reactions and reviews for Partners.

Illya Nickovetch Kuryakin has been sent to New York as the Soviet Union's first representative to U.N.C.L.E. Before he even gets in Del Floria's someone tries to assassinate him. Another organization wants him to remain detached from Soviet contacts. Illya is caught between the KGB, the GRU and Solo, who frankly just does not like him. In addition, he's adjusting to a different lifestyle, one where he does not have to supplement his food allowance by foraging in Central Park. [2]

[Pawn to King's Two]: This is an old and well known story but although this author is well represented here this story has never been recced. I suspect that it is a bit too open ended for many people's liking but I have a particular fondness for "how it all started" stories and particularly for ones that give us a bit of insight into IIlya.

I also consider her to be a fine writer, this is an image which has stayed with me ever since I read this first.

"Look at it well," the officer in charge of them warned. "If you choose to serve in the GRU, there is only one way out for you -- from this very chimney. If you have died an honorable death in the service of our country, your body will be sent here. If you are ever found to be disloyal to our service, your will be put alive and screaming into the conveyor of the furnace and pay for your traitorous acts in its flames. Either way, this is your final fate. [3]

No, really, it's fab. Beautifully written, well constructed and exquisitely plotted, this is an engrossing series of tales that sets up one possible scenario for the arrival of Illya Nickovetch Kuryakin in New York, and then traces the development of IK's growing and deepening friendship with Napoleon Solo. By the final story, "Partners" — now online! — the two men are so close that I choose to see their relationship as barely pre-slash; the trust and intimacy between them are all-encompassing. A favorite of mine. (And FYI, her "Alternate Endings" — a rather lovely little tale in Declassified Affairs 1 — is an MFU version of A Christmas Carol that manages to incorporate a bit of the universe from U.N.C.L.E. Chronicles.) [4]