The Trekker Cookbook was compiled by Johanna Cantor. It contains 88 pages.

This zine is not the same publication as the Bantam professionally published book. 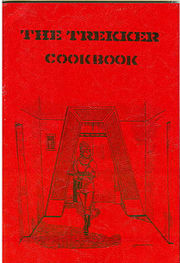 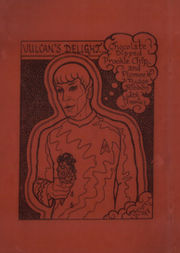 The recipes were submitted by Star Trek fans and pegged to characters from the live and animated episodes, incidents in shows, and excerpts from well-known fan literature.

This zine contains "Letter from a 20th Century 'Housewife'" -- "Letter donated by the Christopher family. Family tradition says the writer was Ann Christopher, the mother of the astronaut, Sean. The letter is dated only "Monday," but internal evidence places it in the mid 1970’s, old calendar. JTC, Archivist, Women’s Caucus."

In January, 1976 I cornered Virginia Walker at a convention and suggested doing a Star Trek Cookbook, with recipes to be gathered from fans. Virginia was most encouraging and helpful, and in fact, this project would not have been carried out in its present form without her. At that time, we planned it as a fund raising project for the NNFC, and recipes were solicited on that basis. We collected them from fans over’the next year and a half. Thanks to Virginia, and to all the contributors. About the time I began the final typing, the NNFC went into reorganization. Therefore, instead of making this a fund raising project, we decided to treat it like all Yeoman Press publications. Thus the price represents a small profit over cost that profit will go, as always, into bringing out other ST fanzines. A word about the recipes: they generally assume some knowledge of cooking. Thus I have assumed that the cook will preheat the oven, etc. If any instructions are unclear, I suggest you get ahold of one of the many good basic, technical cookbooks available and read the instructions for a similar recipe, i believe that will clear it up. Except in a few cases, I have made no attempt to give servings. Servings make no sense to me--it depends on what else you’re having and how hungry your customers are. Use your judgment. Omelette Rad, for example, will serve 4 people on the way to a con; 1 on the way back.