The Quicksilver and the Black 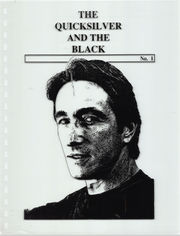 The Quicksilver and the Black is a gen anthology. It contains 149 pages and fan fiction focusing on Richard Chaves' characters: War of the Worlds (primarily), MacGyver, Predator, L.A. Law, Eight is Enough, and Miami Vice.

The art is by Anja Gruber, Sandra Finch, and Teresa Hart. There are also quite a few reprinted cartoons such as "Far Sides," many having to do with aliens from outer space, Native Americans, and the military.

We like Richard Chaves no kidding - yes, we do.

We started off just liking the character of Lieutenant Colonel Paul Ironhorse - actually we fell for him one, after another, just like dominoes... hence our nickname. Following the initial introduction to that character, we - of course - had to track down every other example of Mr Chaves' work that we could... and guess what we found? We found that not only is Richard Chaves a very talented performer, but - as a person - he himself seems extra-ordinarily nice, too.

Well, inspired, we thought this zine would bring a lot of pleasure to our fellow fans who would like to see this actor's other characters explored and expanded upon, and Ironhorse looked at from a different perspective... our remit was to look at the colonel before and after the first season of War Of The Worlds (of course he didn't die at the Cottage - that was just one of Harrison's dark nightmares). There's been a lot of subjective speculation - which you are free to disagree with - in creating back stories for the characters... it has been an enlightening experience.

Many, many thanks go to our authors and artists - without you there wouldn't be a zine - talented bunch of people. And mega kudos points go to Donna for yet again doing a brilliant job of typing in the stories, co-ordinating everyone and everything, and nagging this zine into existence - another impossible job executed with your usual grace, style and aplomb!

We'd like to hear from you as readers, authors and artists - and, if we get enough response, we may even be crazy enough to go for another edition.

PLEASE READ THIS BEFORE READING THE ZINE: Some of the stories within these pages contain in-jokes... we apologise in advance if these are disliked by you, but the stories are so funny and irreverent that we felt it would have been criminal to keep them to ourselves.

We hope you enjoy this strange universe that we have fallen into... the Domino Crossover Saga.

A Bit of Meta

From "It's Not Safe Out There":

Lieutenant Colonel Paul Ironhorse (known as 'Big Guy' to Norton Drake, who obviously knew), military liaison, cheque- writer, head of the non-existent security system (which only worked when Ironhorse himself was trying to break in, but let in aliens masquerading as dolphin communication experts, and Russian scientists who were dab hands at defusing any nuclear bombs you just happened to have lying around), holder of an Olympic medal for stoicism and misusing the word 'semantics', limped out of the elevator stoically ignoring two bullet holes in his left leg (again), a broken arm and multiple concussions.

"What happened to you?" Harrison asked.

"I got ambushed on my 27-mile morning run," the colonel replied.

"My God!" Harrison gasped. "How many aliens were there?"

The half Cherokee (half Hispanic, half Scots, half a pint and a packet of crisps) drew expressive black eyebrows over his hooded eyes in his otherwise totally expressionless face. "Fan writers," he corrected. "Four of them: Hicks, Asselin, Evans and Watson."

Ironhorse met the terrified blue eyes of the scientist and, for once, took sympathy. "Straight h/c, not slash."

Harrison sagged in visible relief, then rounded on Norton.

"I don't know why you're looking so scared. They almost NEVER do anything to you."

"Only more H than C at the moment," Paul muttered as he left bloody footprints across the lab.