From Fanlore
(Redirected from The Prydonians of Princeton)
Jump to: navigation, search 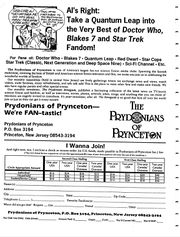 The Prydonians of Prynceton is an American science fiction fanclub.

According to a 1991 ad, it was "one of America's largest fan-run science fiction media fan clubs. [1] In 1992, it had members from thirty-one states, three Canadian provinces, England and the Isle of Man. [2]

They publish a club newsletter The Prydonian Renegade and also, until 1993, operated the Prydonians of Prynceton Lending Library which at the time was the largest fanzine lending library in North America.

They currently hold monthly meetings and organise an annual party.

See - back in 1984 we started as a Doctor Who fan club. We were all living between Trenton and New Brunswick, NJ, and had our meetings at someone's home in Princeton. New Jersey Network had just aired the episode "The Deadly Assassin" (like - there's some other kind of non-deadly assassin? But I digress...) in which the Doctor (played by Tom Baker) returned to his home planet of Gallifrey to solve a mystery and prevent a crime. We learn in this episode that the Doctor's people, the Time Lords, belong to various different "chapters" (presumably based on the colleges they attended; sort of a satire of the English "old boy network"). The Doctor is a member of the Prydonian Chapter, described as both the most powerful and the most devious of all the chapters. Since the Doctor ran away from Gallifrey and renounced his position in Time Lord society, one Gallifreyan official refers to him as "a Prydonian renegade." Hmmm, sounds like a good title for a publication...!

Anyway, since we were strictly a Doctor Who fan club at the time, we thought "Prydonians of Prynceton" was a great name for the club. The Prydonians are the elite of the Time Lords, and there was that cute visual pun in spelling "Princeton" with a "y". We named our monthly newsletter The Prydonian Renegade.

In 1986, we began to cover Blake's 7 as well as Doctor Who. In 1987, when Star Trek: The Next Generation came on the air, we gradually began to include all TV and movie science fiction. Plus, we quickly started attracting members from outside the Trenton-New Brunswick area. So maybe we should have changed our name. BUT - we incorporated as "Prydonians of Prynceton" in 1986. And what the heck, we started as a Doctor Who club and we're still a Doctor Who club. We're just not only a Doctor Who club anymore! So - the name sticks. Deal with it.

And now you know.