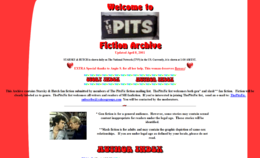 splash screen from April 2001 while still on the Squidge server

The Pits Archive was a Starsky & Hutch fan fiction archive for fan fiction posted to The Pits mailing list.

In order to be eligible for inclusion in the archive, the story (or at least parts) had to have been posted to the mailing list. However, the writers had to submit their stories via a separate process, which cut down on the number archived.

Both gen and slash fan fiction was accepted.

The archive was set up by Flamingo as she had archive management experience with The Starsky & Hutch Archive.

In 2003, the moderators of the The Pits mailing list, Cheryl T. and Judy J., took over managing The Pits Archive. They maintained the archive with just a few updates until 2007, when it went offline.

When the website expired, Several fans hoped to move the website to another server, but this never materialized.

The site's last archived version, earlier dates and the Squidge.org version can be found via Wayback.

Our fine pink feathered friend Flamingo is going to be building a wing onto the S&H Archive. Yep, that's right. Our plea for help has been answered. The wonderful Miss Flamingo has made a most generous offer to provide a home for the fanfiction posted to the PitsFic list. So what we are looking for from you are any suggestions or ideas you might have concerning this issue. How would you like to see it presented? Since this list was started as a place for writers to discuss and post stories from both slash and gen we are hoping that no one would have any objectives to keeping slash and gen together on the site. If anyone has any real objections to them being together, please let us know. As I said we want your input so please speak right up. Suggestions, concerns, etc. [1]

Thanks to everyone for suggestions on setting up the Pits Fiction site, which will be a "wing" of the SH Archives.

Some details of concern: I have no problem with putting both gen or slash on the site, however, there are some issues to consider. If the stories are arranged by author and only noted with (gen) or (slash) next to the story title, then there must be a general age warning on the WHOLE PAGE. We can get into difficulties if we have slash on a page with no age/content warning. This enables parental software to screen the site out for people under age.

Now, if the page has 2 sections the warning only has to be on the part of the page with the slash on it. I don't care how we do it, but I want you guys to be sure of what you want.

Regarding Gen stories, some of them have sexual content. While I am generally opposed to story warnings, again, we may need to put some warning language on stories with sexual content so that parental software can screen it. On a gen only section, we can do this story by story.

Just some sticky details to worry over. [2]

Flamingo is right, though, about putting a disclaimer on the page so parents who want to block these from their kids can do so. If the website were a private, members-only, you need a password sort of place, then there would be no problem. However, if it's a publicly accessible site, then putting up the warnings is just part of being good netizens and perhaps covering it for any future legal questions. A lot of sites probably don't bother, but it seems to me it's like putting up billboards on public thoroughfares when you have a public website and you should be sensitive to the needs or wishes of the community. I'm all for free speech and a defender of the First Amendment, but it never hurts to at least be secure in the knowledge that you have posted all appropriate disclaimers and warnings.

On December 5, 1999, Flamingo posted this update to The Pits:

Hey, guys, I'm hoping to upload the new Pits Archive tonight, along with the upgraded S&H Gen Archive. The slash archive is still being updated and isn't quite ready, but I hope it will be soon. ThePitsFic list and VenicePlace will get to see the new archives before anyone else, since I want to get feedback about any problems the sites have before I turn them loose on the public. ;-)

However, regarding the PitsFic list, I need a volunteer. The Gen Archive and Slash archive are keeping me pretty busy. I need someone on ThePitsFic who feel like they can handle managing the fiction that is posted to this list and act as a go-between between me and the writers in an attempt to help me cut down on having to keep track of *everything.* This is what I'd like. Someone who will:

1) keep track of what is being posted, how many parts it has, and by whom (writer + email addy)

2) contact the writer off list and ask if we may post the piece. I want to be sure we have a record of approval on each story. (If writers would like to give approval when posting their story, that would be great, but I want at least one written piece of email with the approval on it so there's no question.)

3) when contacting the writer, see if the writer has an electronic version of the story that is a normal word processing system, such as Word, Word Perfect, etc. I'd like us to have a version of the story or poem that is in either a .doc, .wpd, or .rtf file. (If anyone doesn't understand this, I can help them with it.) If the writer doesn't, then it would be very helpful if there was someone who would reformat the stories so that they are not ascii files (which are a real pain). If the volunteer could collect and hold the writer's file of her story until I'm ready for it, that would be great.

4) Stay in touch with me (read: nag) and let me know when they have stuff ready for posting. I'll be willing to post stuff in parts if that's what the writers want or wait till it's finished if that's what the writers want. However, it would be nice if new members could go to the archives to read stories in progress (which is a tradition in SH fanfic both in print and on the net!). When I can translate the story, I'll ask for the pieces and then I hope to translate the file, and post it right away.

Anyone feel like volunteering for a totally thankless job with no pay, no benefits, and gets to work with a cranky webmaster besides? Let's not see all the same hands, now!

Right now all I have on the Archive is some stuff by the lovely Otterlady, and 2 pieces of Tammy's. Does *anyone* on the list have a complete list of what's been posted here since the beginning? It would be great if someone had a complete list. We want to get your stuff up on the archive.

If you *don't* want it there, that's fine! No problem. Also, if it is also on another archive, that is not a problem for me, I don't mind it if the same story is in several places.

If you've had pieces posted on the list that you'd like to see on the Archive, please drop Angie a note and let her know the name of the piece, what name you wanted it posted under, and if you want an email addy attached to it for feedback. If you don't want your email addy on it, that's fine, we can put mine and I can forward it.

Let's get an organized list of what's been posted here, so we know what we've got to get posted.

I just finished posting 45 new stories to the Pits Archive. Writers, please check to see if you have new stories and if they're correct. If anyone finds glitches, broken links, or other problems, please email me immediately so I can fix it as fast as possible.

Angie Stacey deserves a major raise for all the incredible hard work she's done on behalf of the Archives in the last few weeks. We've posted over 100 stories, almost all of which Stacy has formatted into html. Send this woman flowers.

If there are errors on the archives, they are mine alone!

We still have 39 stories that need to be posted that we still don't have permissions on. If you haven't contacted Judi about this, please do, if you want to see your name up in lights! [4]

Other Starsky and Hutch Fanfic Archives and Lists