The Oak and the Cypress 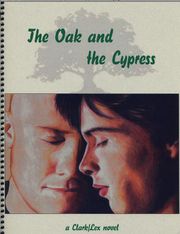 The Oak and the Cypress is a slash Smallville novel by Mirtai. It contains 217 letter-sized pages with spiral binding and a color cover by Sockii. Black and white interior photo-manips are also by Sockii.

This huge novel which spans several decades, Clark realizes that Lex is never going to make a move, so it's up to him to convince the cautious man that love is love, no matter the form, and it's Lex's for the taking. Once they have committed to each other, they must weather all sorts of storms, from Jonathan Kent's angry disapproval to Lex running for governor of Kansas to Clark's own growing pains as he slowly becomes the superhero he was always meant to be. Lex wants to be sure that Clark doesn't get lost in the shadow of his forceful personality, but Clark has his own ideas about that and steadfastly shows that, no matter what, love will always carry them through. [1]

There has yet to be a Smallville Clark/Lex slash zine that rates in the "best in fandom" category, but this one is the closest yet. Well formatted, well edited and the characterizations aren't half bad. It's an AU future zine and it covers decades in its scope. The writing is pretty good as is the plot, but I don't know that it's worth the $36 (within the US) it costs to get hold of this. Available on Mirtai's LiveJournal. [Nov. 2007] What the hell was I thinking? I tried rereading this one a couple weeks ago and could barely get through the first few chapters. Clark and Lex act more like teenage girls than young men, the characterizions are off all around, the point of views shift constantly, and the plot leaves a whole lot to be desired. This still isn't bad enough to get tossed in the worst in fandom category, but it's most definitely on the mediocre end of the scale here. [2]

I haven't written a LoC in years, but I have to write one about The Oak and The Cypress. I was so impressed with the novel that, as soon as I finished it, I started reading it again from the beginning. The writing is exquisite, clean and clear and crisp. The details — the way Lex enjoys Clark touching his head, the subtle way they read each other through mere expression or touch — were lovely and so refreshing to read. The plot was excellent. To write something that shows Clark's metamorphisis from 'Clark' to 'Superman' and do it so that it makes sense and incorporates a homosexual relationship with his (in other universes!) arch enemy was a huge task and here was done so believably, so delicately that I barely saw the change happening. It was done in increments, a natural progression for Clark from an emerging boy to a man with probably the heaviest burden any man could ever shoulder.

I also enjoyed the Batman folks. I'm less familiar with this Batman universe than I am with Superman, but I know enough to see how those characters were also handled with accuracy and, no other word for it, love.

Mirtai obviously feels deeply for Clark and Lex, but also for Bruce and Dick. It's so obvious in every sentence that it makes me care even more for them than I did before I read the novel! That's some task, considering I'm pretty jaded about "/" at this point.

On a more 'editorial' thread, there were hardly any typos, no more than in professional novels. There weren't even any plot points I would have asked to be changed. Everything just flowed perfectly.

Can you tell I'm extremely impressed?! [3]

Have you ever read "The Oak and the Cypress" (Clark/Lex)? It's on someone's LJ now but was initially published as a traditional, very nice-looking zine in 2005. A friend of mine loaned it to me at a party and all the old-school fans who were there gushed about how utterly fabulous it was, and I mean *gushed*. I hated it, it made me want to spork my eyes out. I'd read about a gazillion on-line SV and DCU stories Clark/Lex stories by that point, and the zine felt off to me. Not poorly written -- just "off", whatever that means. I wonder if my problem with the novel was that it was old skool-style fanfic. [4]