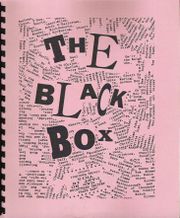 From Crevichon Press: "What can we say about The Black Box' that hasn't been said already? It's a manic 100+page saga of slash-fiction and time-travel. If you ever wanted to know how many people you can squeeze into a Viper fighter, what Peter Tork looks like in drag, or what BJ Hunnicutt might say to a Wookiee, this is the zine for you!"

From Bill Hupe's catalog: "What is the secret of the black box? Who is the strange man Smith and Jones meet in chapter 3? Who does Vila see necking in the corridor? Just what were Starsky and Hutch doing on the beach anyway? These are just a few of the questions posed at the beginning of this wild and convoluted romp through endless crossovers."

From an ebay seller in 2012: "THE BLACK BOX, was published by Crevichon Press in 1992 in the UK (authorized reprint by Bill Hupe) and is 130 pages long. This is a thirty chapter novel involving fandoms from the 1980’s and how the different characters act and meet. Very amusingly done. Some of the shows depicted are: Starsky and Hutch; Alias Smith & Jones; Blake’s 7; Fawlty Towers and more."