The Beauty and the Beast Companion

The Beauty and the Beast Companion is a gen and het resource to the show. 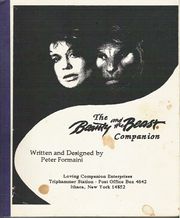 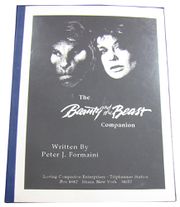 From a flyer in the The Beauty & the Beast Buyer's Guide to Fanzines‎:

The Beauty and the Beast Companion is a 304 page reference work for one of the finest dramatic series ever to grace network television. Perfect bound, with a color cover by renowned fan artist Sue K, this work contains detailed synopses of all 55 episodes, critiques, full production and performance credits, literary and musical references, trivia, series milestones, and special information for each episode.

The Beauty and the Beast Companion is expanded and updated by this quarterly journal. Each issue is 35-45 pages long and contains additions, revisions and corrections to the Beauty and the Beast Companion. Also included are essays, news, rumor control, classified and display ads, humorous articles, convention news, fandom news and commentary, poetry, fanzine reviews, syndication information, contests, and lots more.

Published before the last three episodes aired, this non-fiction guide to the series explores each episode with a synopsis that includes episode number, title, date of first broadcast, and critical rating, plus credits, productions notes, trivia, etc. An excellent reference guide -- but you'll have to make up your own for the last three episodes! [1]

In May 1991, the cover's artist, Sue Krinard, disassociated herself from this zine:

Recently, I entered into a professional arrangement with the author of a semi-professional publication called The Beauty and the Beast Companion to provide a cover painting of Vincent and Catherine for an updated version to be distributed by Random House. My personal dealings with the author were at all times cordial and pleasant, and at no time did I consider political "stance" in B&TB to be a relevant issue in terms of our professional relationship. This still holds true. However, it has been brought to my attention that one of the quarterly updates to the B&TB Companion, specifically the February issue, contains an editorial that is not only unprofessional in tone, but also criticizes and belittles fans of B&TB who hold views which I happen to share. To relate the contents of this editorial, which purports to analyze the split in fandom, is not necessary or desirable here; I'm sure it could be obtained in full else where. Suffice it to say that I wish, at this time, to fully disassociate myself from the contents of said-editorial or any future remarks of such a critical personal nature that may appear in future updates of the new B&TB Companion. Though I agreed to do the cover, my personal views are NOT represented by the contents or opinions of the author. Sadly, the author also sent personal letters of a somewhat vitriolic nature to friends of mine who took polite exception to some of his comments; in one such letter he opined that there were about 12 people in fandom whom he would not "allow" to buy his books. Also, I fear that by his own criteria, I would most likely be one of those unfortunate few. [2]

Other fans took umbrage to commentary in this zine, leading Sharon Wells to write a June/July 1991 open letter. See An Open Letter to all Readers of "Adult" fanzines.

Remember Beauty & The Beast? If you're reading this, I'll bet you do. Once upon a time, a 3rd-place network (back when there only WERE 3 networks) took a chance on a modern update of a classic romantic fairy tale. Creator Ron Koslow's show brought romance, culture and not just a little class to the wasteland of Friday night television.

But like I said, you probably know all that already.

What many people may not know is that B & B inspired a loyal cult following which included conventions, fanzines, and merchandise that, for a short time, was second only to "Star Trek" in popularity. Not too long after Beauty & The Beast aired its final episode in July of 1990, this fan-produced book appeared. Although rather simply constructed and unofficial (hence the absence of any photographs), the book does indeed provide a detailed history of the show, and an episode guide with critical ratings. Televison violence was a hot issue in the late 80's and early 90's, and the author addresses this with "violence" ratings for each episode. Literary and musical references are included, as well as cast and crew credits for each show. I actually have the distinction of having provided the author with some VHS tapes of episodes to insure closing credits were accurate on some episodes. I received no credit for this (are you out there, Mr. Formaini?) but since we were really just fans trying to show our support for our favorite show, it's not that big of a deal.

As of this writing, there has been no "official" published guide to this almost-forgotten series. So "The Beauty and the Beast Companion" will have to do. Certainly, the critical ratings are highly subjective and do, at times, detract from the author's credibility. But I find myself agreeing with him more often than not. And the book, while clearly still an amateur effort, is generally well-written. Mr. Formaini clearly knows and loves his subject. And for that, we fans that still remember and enjoy the show can be grateful. [3]