The Battered Tin Dispatch Box is a slash Sherlock Holmes anthology that was published in 1997. It is 116 pages long and contains 12 stories and 1 poem.

The zine was dedicated to "Absent Friends with gratitude and affection."

From a submission request: "We are a new press planning our first publication - a Holmes/Watson '/' zine. We already have some material from such fine writers as The Resident Doctor, Bradstreet, Ophelia and Mary Rose Watson, but we'd welcome some more. So, if you have any H/W stories you've been harbouring or even just contemplating, then now's the time to act - we'd be delighted to hear from you. The game is most definitely still afoot!... Deadline for submissions is Easter 1997. Please Note - We are sorry but we cannot accept any artwork, death stories or hard core S & M." 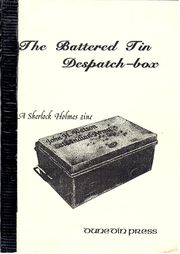 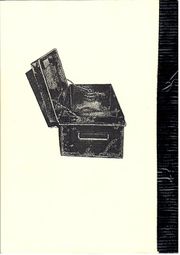 a submission request for the yet-to-be-titled zine, flyer printed in Late for Breakfast #30

Hello and Thank You for opening up this, The Battered Tin Despatch· Box . I hope you will enjoy the delights held within it!

I chose the name because this was the box owned by Dr Watson, in which all the unpublished adventures of Sherlock Holmes were stored and I felt sure that any records concerning the two friends' more private relationship would also be kept there. I must take a moment here to express my heartfelt thanks to all the talented writers who have contributed to this publication -- your hard work and patience is hereby applauded. Thanks also to Christine for her scrupulously dedicated proofreading and to certain others who continually provided sorely needed tea and sympathy over the last year. The greatest debt, however, is owed to the incomparable and irreplaceable 'Sidney Carton' without whose unflagging creative support, artistic insight, not to mention all the 'technical stuff', this zine most certainly wouldn't have seen the light of day. Coming to the end of the list of people without whom.... etc. there are two individuals who are sadly no longer with us but to whom 1 still feel the need to made a public acknowledgement. First, there was Vivien; a very good friend, a source of inspiration and most importantly, the person who first revealed the delights of the Sherlock Holmes/Doctor Watson relationship to me. And finally, a man whose portrayal of the great detective on TV during the '80's led so many people to discover that there was so much more to this unique character; Mr Jeremy Brett, whose talents will long be missed.

This zine has been a labour of love and I hope that you will read and enjoy it in the spirit of respectful affection in which it has been produced. -- 'Moriarty'

(story summaries are from the publisher)

While the author list for this 'zine contains many of the same names as in Friend of My Heart ... the combination of 2 more years of writing experience and a greatly varied tone makes this a horse of a different color. While six of the stories do discuss the aftermath of various cases, they do so with less of an eye towards setting up passionate declarations of love and more to describe the progress and pitfalls of being an ex-army doctor and his famous consulting detective friend. Many of them even assume an existent relationship and concern themselves with other elements, like comedy ("A Night at a Country Inn", "A Highland Fling", "The Adventure of the Aboriginal Love Chants", "Compliments of the Season"), and do so with a remarkably light touch. This is not an angst-fest by any stretch of the imagination. Nor is it entirely light-hearted. With a discussion of the darker side of humanity in "Homecoming", Holmes' past associations with Moriarty in "Phantoms of the Heart", and a much-needed confrontation set after DYIN in "Beeswax and Belladonna", a certain balance is struck without relying on cheap tricks or obvious setups. And of course, there's still sex. The steam rating for this one would have to be 7 out of 12 stories, with 2 non-steamy comedies left out. And yet the sex is not a desperate attempt to drag our heroes, kicking and screaming, into bed. The characterization would never stand for that. My personal favorite story, "The Adventure of the Christmas Cat", has nothing more intimate than a walk in the park arm in arm; nonetheless, it does not descend irretrievably into WAFF or angst, but rather settles for a genuine companionship that bears a striking resemblance in tone to several scenes in canon. [1]