Friend of My Heart 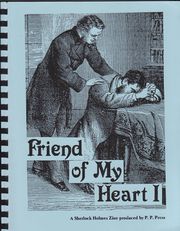 cover of issue #1 by Sidney Carton

Friend of My Heart is a slash Sherlock Holmes anthology.

A fan described its contents as "quite honeyed characterizations." [1]

"This zine contains explicit same-sex scenes and will not knowingly be sold to anyone under the age of eighteen. An age statement is required with all orders/inquiries. Please do not order if you object to the premise."

[From the editorial page]: As you will see from the Contents pages, we have divided the zine into two parts, the first of which contains various versions of our heroes' 'first time' together; part two concentrates on the charms and vagaries of an established, loving partnership. 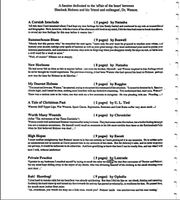 If you want cuddlefic, this is the place to get it. The dearth of H/W in general makes a 'zine this large a rare and happy surprise. The WAFFish, sex-focused style is also different from what you will find in most online fic. This unity of style can make it seem a little bit repetitive after a while, but better that than leaving us unsatisfied! In terms of structure, this 'zine is laid out in two roughly equal parts: the "first time" fics are all in part 1, while the relationship fics are in part 2. There really aren't any significant hurt/comforts, angsts, or even mysteries in this edition. However, this lack of variety is more than made up for by the wonderful visual layout. I have rarely seen a 'zine so well designed; it is positively full of delightful little pictures filling up the whitespace and lending a period feel to the whole collection. Speaking of period, the fics themselves do a fairly good job of sticking to their time (always important in a historical). They tend to use the Granada canon instead of the written one, probably for better visualization, but several of them do make reference to Mary or in some other way blend the two storylines in a way that is not offensive even to my rigid sensibilities. [2] 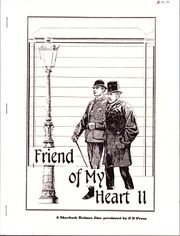 Friend of My Heart 2 contains 130 pages and was published in 1994. Cover by Sydney Carton.

Like its predecessor, FoMH2 is a large, well-designed 'zine centered on WAFF and sex. It differs from the original in two key aspects: first, that the fics tend to be less purely WAFF and more often contain plot, angst, or humor; and second, that there is less of an emphasis on or division by "first time" and "not first time" fics. Therefore, fewer of the fics can be easily divided into these categories. It also contains a bit more poetry, including at least one epic on Reichenbach. Granada is again the emphasis, but not all fics are recognizably settled in one canon versus the other - they discuss issues or incidents that are extra-canonical and could fit into either one. Otherwise, this is a very reasonable sequel to the first, and as long as you didn't think the first was too angsty (and I'm not sure how you could), you will probably enjoy this one to the same degree or even more so. [3]