The Art of Alliance 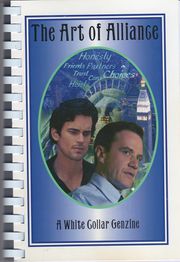 Neither the color cover nor any of the interior color or black and white photo-manip art is credited. In the editorial, the editors ask readers if they'd be willing to pay a $10 fee for PDF zines to "help defray the cost of keeping our word processor and distiller programs up to date." 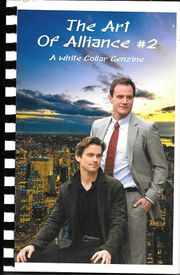 "THE ART OF ALLIANCE 2 is a GEN White Collar collection published by Catherine Schlein. I bought this fanzine on the strength of her extensive writing and publishing history mainly in the Of Dreams and Schemes series and The Art of Alliance 1. I would give this a rating of 5 Stars.

She has published a new fanzine based on one of my favorite shows: White Collar. I really like this show because of the strong relationship between the straight laced FBI Agent, Peter, and the former conman, Neal, who is assigned to Peter in order to help track down art thieves. Peter doesn’t quite trust Neal and thinks Neal is trying to con him. Neal, of course, is trying to con Peter, and therein lies the magic. I thought the fanzine explored their lives and relationships at a deeper and more complex level than even what appears in the show (if that is even possible).

My only complaint: Some of the stories are written which take place in the last season before the finale (which has not aired yet) in which things will be hopefully resolved. They include references to situations which may change at the conclusion of the series. This is a very minor component and is easily overlooked.

Characterization: The authors have captured the essence and heart of the characters, especially Neal and Peter. I could really see Peter and Neal saying and thinking these things. She has really captured their heart and essence. The price of the fanzine was worth it, just for this aspect.

Hurt Comfort: This fanzine abounds in hurt comfort themes from Peter’s Father in Law saving Peter from a certain death to Peter rescuing Neal. The hurt comfort aspect is sometimes subtle and sometimes overt and it adds layers and depth to the stories.

The following stories appear in the fanzine:

I would highly recommend this zine to White Collar lovers." [1]