You may be looking for The A-Files.

The A-Team File is a gen A-Team information and fiction anthology. There are four issues. The first three are anthologies and the last issue is a novel.

The A-Team File 1 was published in October 1983 and contains 50 pages. 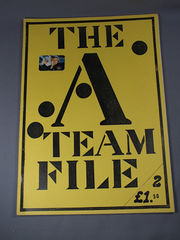 inside sample from issue #2 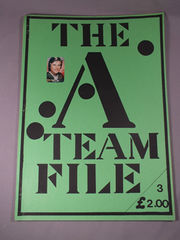 inside sample from issue #3

[Well, Maybe Next Year]: (7 pages) Strange story about the team working at an unusual hotel... [2]

The A-Team File 4 was published in March 1986 and contains a single 54 page novel.

This zine is one long story, and a good one too. The team is stuck with two female-tag-alongs this time, along with Amy, as they travel to Gothinia to rescue a kidnapped child. [4]