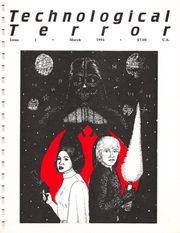 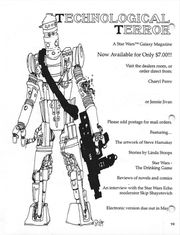 Technological Terror is a 54-page Star Wars fanzine published in 1994.

An artist friend of mine and I want to make a new kind of zine, I already have a title for it — Technological Terror. The submission guidelines are simple: "You make it, we take it." We hope to have a section devoted to each character, theme, side of the Force, or whatever you want. This zine will be featured as an electronic zine, but we will produce high quality hard copies for non-computer users. We're hoping to have it ready for holiday shipping. Some of the perks of the computerized zine will be real-time sound and visual effects, plus the ability to print the zine. I will bring my Mac to MWC '94 to give a demo of this new technology. Any help and/or submissions will be greatly appreciated.

Thanks for reading the first issue of Technological Terror!!

I was 9 years old when Star Wars came out, and like many of you, I became an instant fan. When I saw the Timothy Zahn books in May '92, I decided to get involved with on-line fandom. Using America On-line, I found Arwen R., zines, Media West, and the rest of you. It wasn't until after Media West '93, that I decided to go ahead with my long time dream of doing a Star Wars Stack (electronic magazine).

I want Technological Terror to cover many aspects and levels of Star Wars. This magazine is for YOU!! Send articles and stories you're interested in. I don't want to make a list of "don't sent this, and don't sent that." Just keep submissions in the true spirit of Star Wars. If you need story or artwork ideas, just let me know. I keep a list of possible stories on file. If there's anything you'd like to see in upcoming issues, let me know. I'm sure we can find some way to include it.

Between work, school, and the magazine, I try to find time to play video games, listen to music, use my Macintosh, and watch Star Wars (of course!). Drop me a line anytime. If you have a modem I can be reached at the following addresses: [contact info for this fan: America On-line, Internet (an AOL email address, Prodigy, and Fax]. 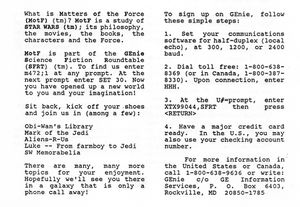 instructions on how to access "Matters of the Force" (MotF)

The second issue was never published. 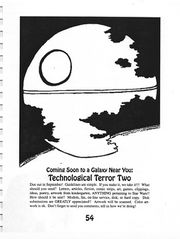 It was to have featured the artwork of Steve Hamaker, stories by Marti Schuller, and Mary Jo Fox, an interview with Lisa Cowan, Star Wars Insider writer, reviews of upcoming novels and comics.