Taaz Avine is a Kirk/Spock (plus McCoy) story by Syn Ferguson. The art is by Gayle F.

It was published in The Price and the Prize and is online. 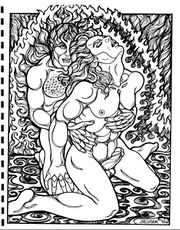 "Spock and McCoy are disguised as a Romulan and his slave while searching for the missing Kirk, who they discover has been turned into a prized sex-slave. An unusual story that includes (a reluctant) McCoy in the main K/S relationship."

"To save both Kirk and Spock, McCoy, disguised as a pleasure slave, must publicly engage in sexual intercourse with Kirk, also a pleasure slave. McCoy succeeds, but not without injury to his own spirit."

Regarding K/S/Mc, I was sitting and reading that classic zine THE PRICE AND THE PRIZE when I found a K/S/Mc story there. I was scarcely expecting one, but I was delighted. It was TAAZ AVINE by Syn Ferguson. Perhaps some readers would not define it as K/S/Mc, but since it involves the same basic concept that created the K/S/Mc relationship in IN TRIPLICATE I would be hard-put not to include TAAZ AVINE in that category. It shows that K/S/Mc used to be integrated into the rest of K/S without being given any special notice or singled out as different. No one thought that TAAZ AVINE was out of place in a K/S zine. I am willing to accept the fact that the situation has changed. But nevertheless I find this change saddening. [1]

Another beautifully written piece. I was drawn into the story and felt the anguish of the characters. I liked seeing McCoy in the story. But in the end, I felt pity for all three of them (as perhaps I was supposed to). Well done, but not for me. [2]

This is a darkly vivid no-holds-barred story from a consummate K/S writer. It's a master/slave story in a way; a menage-a-trois story with McCoy in a way; and also gives us another unique Vulcan mind-love-way. It's written in a very immediate mode, where we come in on this outrageous scene which isn't spelled out for us as to how it came to be. McCoy finds himself a slave to Spock on a Romulan world, at a sex show. He can't quite remember.... The writing is excellent, in McCoy's deep, dark thoughts, and the beautiful expression of his perception of Kirk and Spock.

An atmospheric setting; and the tension during the show is very high. There is a human slave in taaz avine, and only his bondmate can sate him. So the guests at this show get to bid on the human, have sex with him on stage, trying to make him come. It's Kirk, of course. We learn, though toward the end, what the taaz avine is, and that Kirk and Spock were in the middle of it when the ship was attacked and they were separated. It's a mental dominance/submission battle of wills which takes place to allow the bondmates to come to a place of balance. Consummation is imperative for this process, but not only were they separated in the middle of it, but now Kirk has amnesia.

Somehow Spock must help Kirk (and himself), but it's too dangerous here. McCoy knows that if Spock goes up on stage, together he and Kirk will likely be recognized by some Romulan, and they'd get killed.

Spock is in just as bad a way as Kirk—hugely aroused, almost beyond endurance; and McCoy has to try to help him maintain control. Lots of great posturing in front of the Romulans. Spock ends up sending McCoy up to have Kirk. Spock kisses McCoy in order to initiate a mind-link, so McCoy can be the mental go- between for Spock to get through to Kirk's mind. Poor McCoy—under these horrendous circumstances he can't get it up at first, not with his captain. But as slave to slave (Kirk thinks, in his amnesia), Kirk helps McCoy with a show of mastering and taunting him, to the cheering approval from the audience. Then he won't let McCoy have him, and by this time McCoy is crazed too, and really, really wants him.

Unfortunately, the climactic scene here wasn't written so I could really tell what was going on. Something happens...someone in crowd recognizes Kirk? The show stops, Kirk is chained...McCoy is fucking Kirk but feeling what Spock feels...agony- ecstasy orgasms...and a fire breaks out or something, and Kirk's owner is dead and the patrons are fleeing, and Spock takes Kirk and McCoy away.

The story ends where we know Kirk will be okay, and there are some beautiful, meaningful, sweet words between Spock and McCoy. [3]

Wooh, this is so beautifully written! *wipes tears too* I'm looking at that artwork and thinking this fire thing is very real. The art reminds me a bit of Alex Grey's work, with the mystical flames and the auras. And this is what I call extremely good writing of this concept, because as one reads, it gets mirrored. This room is all lit up now, lol. Also, I've been studying this effect of having flames shoot out of my hands - I can't exactly start a real fire, but heat is definitely created and some people who resonate with me say that my touch is healing if they feel that heat from it. Of course, I can't always tell them how that comes about! hehe. (By the way, the word mirror reminds me once more that we as readers either play the role of the bad guys or good guys, depending on our position of respect towards the characters. In this story, the bad guys have their mirrors, but McCoy is the friend who feels those things inbetween. By the end, I see that distinction gets blurred - in the sense that ok, the bad guys came to see this motivated by dubious goals, but the "union" transcends those and can even "turn" some who experience it). In conclusion, I want to say well done, and thank you for the concept of Taaz Avine: something which at first glance would seem "made up", but is in truth a reality of a psycho-sexual nature. The best nature there is, imo... :) So may I also take the opportunity to say CHEERS to the K/S fandom (was feeling a bit jaded about it recently, but your story relit the flame). [4]

ahhh, so good to see this one up here! I first read this in The Price and The Prize, and it completely boggled my mind. the writing is lush, sensuous, searingly hot, all things I have come to expect in your stories, and it's set in the Mirrorverse, FTW! and the art so perfectly matches the story, by one of my very favourite authors, *and* one of my favourite artists to boot -- and one helluva rip-roaring damn fine read! a universe not for the faint of heart, but with its own rewards, for those who can grab them. kudos indeed, kai Syn, kai kassai!! [5]

ahhh, so good to see this one up here! I first read this in The Price and The Prize, and it completely boggled my mind. the writing is lush, sensuous, searingly hot, all things I have come to expect in your stories, and it's set in the Mirrorverse, FTW! and the art so perfectly matches the story, by one of my very favourite authors, *and* one of my favourite artists to boot -- and one helluva rip-roaring damn fine read! a universe not for the faint of heart, but with its own rewards, for those who can grab them. kudos indeed, kai Syn, kai kassai!! [7]

This was just gorgeous. Sequel? [8]

Oh My! Fans self.

Well written and gorgeous artwork too.