Survival of the Fittest (Starsky and Hutch/Emergency! zine)

You may be looking for Survival of the Fittest, a Stargate SG-1 zine. 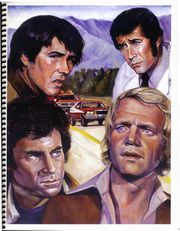 Survival of the Fittest is a 343-page crossover slash novel by Kaye Austen Michaels. The cover is by Lorraine Brevig.

From the Author's Notes

"The characters of John "Johnny" Gage, Roy DeSoto, Kelly "Kel" Brackett, Joe Early, Dixie McCall, Mike Morton, Chet Kelley, Marco Lopez, Hank Stanley, Mike Stoker, Joanne DeSoto, and Henry the hound dog were created by Jack Webb and Robert A. Cinader for the television show Emergency!, and are respectfully borrowed for the enrichment of this fandom story. I'm delighted to have these characters as "honored guests" in this Starsky/Hutch novel.

The television show Emergency! ran from 1972-1978 with two spinoff movies in 1979. The series pilot, "The Wedworth-Townsend Act," aired in 1972, depicts a fictionalized account of real life events that led to the groundbreaking Wedworth-Townsend Act that allowed trained firefighter paramedics to operate in California. LA County was in many ways the birthplace of the paramedic program. I place season two of the series in 1972-1973 based on canon evidence, and from there I have tried to follow the canon timeline based loosely on the episode airdates.

In present day emergency medicine, ER physicians and trauma surgeons are usually the products of different specialties. However, in Emergency! Kelly Brackett, M.D., carries F.A.C.S. (Fellow of the American College of Surgeons) credentials and is shown performing surgical procedures in many episodes. I have chosen to follow the show's canon in this, and therefore refer to him occasionally as a surgeon.

For my medical research surrounding the "Sweet Revenge" episode in Starsky & Hutch, I depended on actual paramedic cardiac protocols from several rescue departments across the country. For other rescue scenes, I depended on Emergency! canon, internet resources regarding emergency medicine in the 1970s, and nursing school texts circa 1982."

Starsky yawned and performed a series of unconsciously sexual stretches. When Starsky winked at him, Hutch ...stood with his back to his partner and adjusted himself in his jeans. This isn't happening to me now. Not after the great time we had last night...just being us. Damn it, that's sacred, he's sacred!

Hutch hadn't endured a morning this vulnerable in ages. What made this one different than any of a thousand mornings? The closeness, his mind answered immediately.

He knew how to get through this vulnerable morning without breaking his seven-year fast.

Hutch sat behind the wheel in his parking spot beside the muddy Land Rover and tried to concentrate on the scenery. Out here, roughly one hour and five minute's drive from Venice, he could pretend he wasn't one of LA's finest. He was Ken--an out-of-practice closet case who needed a little attention and understanding from a man who reached for him with sex on his mind, not a man who reached for him with his heart and soul and pushed every platonic boundary before drawing back to the safe side of heterosexuality.

Johnny Gage stood in the doorway, leaning casually against the doorjamb and giving him a come hither smile. This was a man, certainly, but a different man, with different selling points and attractions. This was no substitute for the straight, straight, forever and ever amen, straight ideal.

I just finished reading your entire story, and I have to tell you, it was wonderful. When I was growing up, I was not only a big fan of Starsky and Hutch, but also of Emergency. I loved both shows, and the way you put them both together into a story was just so marvelous. For over a week now, I have looked forward to the time of night when everyone was asleep and I got to read some more of this story. You made every character come alive, but none more so than Starsky, Hutch, Johhny, and Kel. The story of their lives and love for each other was truly a work of art. I was sorry when I came to the end. I wanted it to never end. [1]

OMG! This story has been an obsession for me since I started it days ago!! RL kept getting in the way! The character detail is amazing. So much work and love went into this, obviously. Thank you so much! I so intensely enjoyed it. Other stories will pale by comparison - I may need a break in order not to judge others too too harshly :) [2]

I started reading this when it was first announced here and I have savored every word throughout the entire, what seems like forever, three weeks. This is a beautiful story about two men who finally get together. Why it took Starsky so long lends so much to the whole plot of the story. I really wished it hadn't ended.

KAM you did a beautiful job on this story and I give credit to all who was involved from the beginning to get this story to us to enjoy.

I just wanted to say how much I enjoyed this story. It was beautifully crafted and held my interest every every inch of the way. I know nothing of Emergency but I came to care about Johnny and Kel. I thought Starsky's line that he 'gets shot at more than the entire Kennedy clan' was great. I read it on my Kindle and thank you Flamingo and the site mods for making that possible. [4]

Wow, what a thorough, well thought through story that answers a alot of questions left open in the S&H series. I'm amazed at the way the details were woven around the episodes, both S&H and Emergency! Combining the two series, following all the timelines, and interlocking them to make a masterfully crafted story. Just beautifully done! I think the m/m couplings were believable and intense in the scenes between them.

I totally believed in the H/J pairing, and honestly, though I feel I'm being deceitful, I was sort of rallying in the background hoping Johnny and Hutch would find thier way back to each other. I understood the initial break up, and I guess because I'm more attached to the character of Hutch, I wanted him to be happy. I knew he couldn't love Johnny the way he needed to early on, but I hoped maybe he'd find that with the lack of Starsky's love. Sigh. Not to say I didn't love the ending, because I did. I just wanted you to know how much you kept me in suspense in the middle and towards the end. Wonderful!

Oh, and I meant to mention the lovely artwork by Lorraine Brevig. She's always been a favorite of mine, and these were beautifully done! [5]

Comments Regarding Feedback from the Author

Spoiler Alert Response: May I tell you a secret? I fell pretty hard for the H/J pairing myself. Truly! In my SH writer's heart, I couldn't see any other outcome than S&H enjoying their happy ending, but part of me could really *see* Johnny and Hutch working out, and I even toyed with the idea of writing an alternative ending (not to be published or anything) in which Johnny and Hutch do find a way to stay together. I think under other circumstances they could have been very good for each other. But part of writing the novel was taking the opportunity to explore a more complex view of Starsky than we get in canon, and I'm grateful that you enjoyed taking that lengthy journey toward his acceptance of self and Hutch with me. Thank you again for making my entire month with this feedback, and I apologize that I'm just now responding. RL often keeps me away from the computer and I don't get to spend as much time with fannish activities as I'd like, but I am truly blessed to be a part of this fandom with all its amazing people. Let me also give MILLIONS of kudos to Lorraine for the breathtakingly gorgeous artwork and to my superstar editor, Keri T., for all of her wisdom, encouragement, and support in helping me realize the dream of this novel. Hugs! [6]