Stave the Wails is a filk collection of filksongs, most of which were popular (to some degree or other) in the SF Bay Area in the late 80's. The editor's note says:

We wanted to make a filk sampler; something along the lines of a good chocolate assortment with a variety of cremes and nuts and chews and maybe a few truffles. So we sifted through raw convention tapes, song collections and our own memories to come up with a long list of titles that we thought were well-written, entertaining and, in general, not easily available in published form. ... We tallied up the attributes of the songs we'd already picked and then looked for material to even out the balance. ("We need more group songs. Doesn't anyone write group songs anymore?" "Here's six more good group songs." "OK. Now we're seriously heavy on ose. We need more funny stuff." And so forth.)

Fourteen of its songs were nominated for or won Pegasus Awards: Bloodchild, Cosmic Drain, Do It Yourself, Drink Up the River, Fire in the Sky, Flying Island Farewell, God Lives on Terra, Lullaby for a Weary World, Marcon Ballroom, Mommy, Can I Have a Spaceship, Ship of Stone, Time and Stars, Vampire Megabyte, and Wishful Thinking. 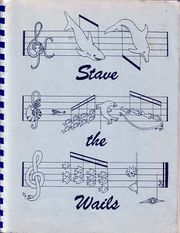 Cover of Stave the Wails