You may be looking for Star Fleet, a fan club for fans under the age of 14. 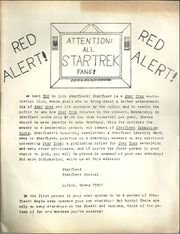 STARFLEET: The International Star Trek Fan Association, Inc. is a Star Trek fan club which was created in 1974.

It has a long and complicated history; see Links to Much History.

From a very early flyer:

We want YOU to join Starfleet! Starfleet is a Star Trek appreciation club, whose goals are to bring about a better understanding of Star Trek and its concepts by the public and enable the public to see how Star Trek relates to the present. Membership in Starfleet costs only $3.00 (no cash accepted) per year. Checks should be made out to John Bradbury. This fee entitles the member to a membership packet; six issues of Starfleet Communications, Starfleet's bimonthly newsletter; a Starfleet Identity Card; rank in Starfleet; position on a starship; answers to any questions concerning Star Trek; a publishing outlet for Star Trek materials and many other privileges. And if you're the first person in your region to join, you will be placed in command of your own Starship!...

Be the first person in your star system to be a member of Starfleet! Maybe even command your own starship! There are only so many starships in the Fleet! And besides , think of the galaxy of fun and wonders you're missing!

From a 1976 ad blurb in the 5th International Star Trek Convention souvenir book:

This organization was also the umbrella fan club for many, many, many other smaller local fan clubs, all titled "U.S.S. _____." One example: U.S.S. Atreides. 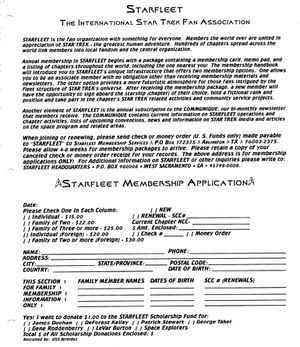 The roots of Starfleet begin in 1973 when John Bradbury and a group of Texas Star Trek fans formed the USS Enterprise. A dilemma came when other groups wanted for their own groups based on their chapter. The command staff of the Enterprise subsequently decided that allowing other vessels was the solution to their problem of wide spread expansion of members. On May 23, 1974, the first issue of the organization's newsletter (then called Starfleet Communications) announced that "The USS Enterprise has been reorganized, effective Stardate 2538.0. It will henceforth be known as Starfleet, due to directives determined during reorganization".... [1]

In 1976, the organization was renamed Starfleet Command and a number of chapters had been established around the U.S. However, by 1980, problems had developed and the organization's newsletters had become infrequent. The former Captain of the USS Republic (who held the rank of Commodore), now promoted to Vice Admiral, was Eric Stillwell. He began a personal crusade to improve the group through a program called "Mandate for Change".

Because of delays in preparing and distributing the official Starfleet Command newsletter, Admiral Stillwell initiated his own high-quality publication, called the Starfleet Supplemental Communiqué. This was accomplished with the help of his childhood friend, former first officer of the USS Republic, Tony Wynn (who in his Vulcan persona, used the pseudonym "T. Wxyn"). Wynn was promoted to Chief of Communications, with the rank of Rear Admiral. The Starfleet Supplemental Communiqué then replaced Starfleet Communications as the official newsletter, and the name was eventually shorted to Starfleet Communiqué.

A new constitution was approved in 1981 and the name of the organization officially changed to the simplified Starfleet. Stillwell assumed the title of Fleet Admiral and became president of the new group. He served three years as head of the organization and publisher of the newsletter. When Wynn was dismissed as Chief of Communications, he left Starfleet and founded the rival organization Trek International in 1983.

In 1984, Fran Booth, the Captain of the USS Constitution, succeeded Stillwell as Commanding Admiral of Starfleet. She inherited a disorganized fleet with a large backlog of membership applications. Booth implemented various revisions to the structure of the organization during her tenure, ensuring memberships were processed, and resumed publication of the Starfleet Communiqué, before being replaced by Steven Smith in 1986.[2]

STARFLEET Is the fan organization with something for everyone. Members the world over are united in appreciation of STAR TREK - the greatest human adventure. Hundreds of chapters spread across the world link members into local fandom and the central organization.

Annual membership in STARFLEET begins with a package containing a membership card, memo pad, and a listing of chapters throughout the world, including the one nearest you! The membership handbook will introduce you to STARFLEET's unique infrastructure that offers two membership options. One allows you to be an associate member with no obligation other than receiving membership materials and newsletters. The other option provides a more futuristic atmosphere for those fans intrigued by the fleet structure of STAR TREK's universe. After receiving the membership package, a new member will have the opportunity to sign aboard the starship/chapter! of their choice, hold a fictional rank and position and take part in the chapters STAR TREK related activities and community service projects.

Nay to the Thirty Mile Rule

From a 1994 statement in Critical Mass:

There has been a lot of talking going on lately about the so called "30 mile rule" sometimes also referred to as a "50 mile rule". People have said that this rule prohibits new STARFLEET chapters from forming within 30 miles of an existing chapter or chapter in training (shuttle). I've also heard that chapters are restricted from recruiting, taking part in special events or conventions, or meeting within a 30 mile radius of another chapter. This is, simply put, nothing but HOGWASH! This "rule" never was a rule. It was a suggestion. On page ten of the STARFLEET Membership Handbook it states "First, the 'shuttle-to-be' must take into consideration the distance from the mothership and other starships. A suggested distance bv STARFLEET is at least 50 miles." This was subsequently changed by the past administration to 30 miles. The original intent of this suggestion when it was made over 12 years ago was to try and spread the fleet out more. It was never intended to give a group exclusive rights to an area. Remember back then Trek was almost a dirty word, it didn't have anywhere near the popularity that it enjoys today. Going over past Fleet records I've discovered that ten years ago the average size of a chapter at commissioning was 12 members. Today the average is 32, over two and a half times of what it was! It is much easier to recruit and find Trek fans today than it was ten years ago. So stop your bickering and get along with your neighbors, there are more than enough Trek fans to go around.

First and most important, there are many rumors going around about STARFLEET's tax situation. Here are the facts on what's going on. We have hired a CPA to review our records for the past several years. 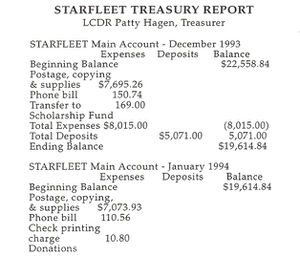 1994 financial report published in Critical Mass #3
STARFLEET was incorporated in 1991 and since that time, no returns were filed with either the IRS or the state of North Carolina (where the corporation is located). In order to file, we must get our records in order. We are currently working with the State of North Carolina and will soon be working with the IRS to resolve our tax situation. We currently don't know if STARFLEET will or will not owe any taxes or penalties. The CPA has been working diligently on getting our records in reasonable order from the present back to the inception of the corporation (and possibly earlier). We currently are filing for an extension for 1993 as we are awaiting some documents from the previous administration. We are hopeful that there will only be a short wait before we do our filings for 1993. Many of you have asked or been told figures of what STARFLEET is spending or will be spending for the CPA. As of today, STARFLEET has spent $7500.00 for the CPA and $1211.50 for the tax attorney. This is not the final figure, and currently we won't know what the final figure will be, but this is something that must be done in order to satisfy North Carolina and IRS. We don't want to see STARFLEET dissolved because we didn't bother to file returns and the IRS coming in and taking everything. As far as we know, at this time, the individual chapters will not be included with STARFLEET's returns. It is suggested that each chapter check with their own State and the IRS to see if you will even have to file at all. I would suggest to all chapters who take in money, please keep complete and accurate financial records. I would highly recommend that anyone handling the money for a chapter use checks that require two of three signatures (this is how we do it for STARFLEET). This would decrease the possibility of unauthorized use of chapter funds.

Links to Much History