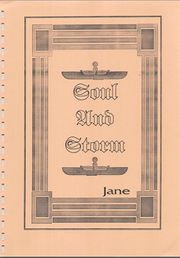 Soul and Storm is a slash AU Professionals 153-page novel by Jane.

See List of Professionals Fanworks by Jane of Australia.

NUT HATCH PRESS is intending to publish the third and final part of Jane's Flesh And Steel trilogy some time this June or July. It's to be called Storm And Soul and follows on from F&S and Blood And Iron I'm not quite sure on the details because there are some contradictory versions of events doing the rounds but I believe the situation is that Nut Hatch can't publish Storm And Soul until it's raised enough money from a zine sale to print the copies. Jane is apparently taking pre-orders now and has indicated that she will only be printing enough copies to cover those orders. [1]

The "army of the night" lies encamped at the city of Bruyeres. Tanis d'Elan is still badly injured, but given the weeks of healing, he is showing signs of recovery, and is chafing to return to duty. The pagano Norsemen have sent an embassy to Bruyeres, and are in the process of signing a treaty with Il Generale, Ramon de los Elanos ... a treaty that will set them to overpower, and hold, the north, while the army of darkness strikes east for Rome. Still, the Ottoman and the Saracen have not quite committed to the war; the Moors hold France and Iberia safe behind the pagano army, but the road to victory seems so long... And then one evening as Bodie watches the moon rise over the smashed city, an officer arrives from the one they call "the Scotlander King of the English." His name is Robert, of the House of Wallace, and he has brought a deal from his father, King William VI of Scotland and England, who holds court in Edinbrugh. (sic) Will Scotland and England join with the army that rose out of Iberia? Robert knows his father's mind ... and the King is well aware that a civil war is brewing in England — and it's about religion. Desperate to be separated from the rule of Rome, but fearful of the Holy Roman Emperor, in the event that the House of Elan should fail, King William has sent his fifth and favourite son, Robert, into war-torn France to make contact — not with Ramon, Sabin and Tanis d'Elan, but with Bodie Fendach ... the wolven scryer. And all at once the future pivots about Bodie ... while, on Bodie's shoulders rests a terrible burden that no man should have to bear. In the stable, the kitchen and the armoury they are whispering, "Rome by Yuletide, Rome by Yuletide..." Is it possible? Bodie knows. And Bodie won't tell — he can't, for love or gods or man ... for the very future is at stake, and pivots about his silence! He is now a freeman ... but he wants more. The wolven desires to be a warrior, and Raymond did make him that promise. Tanis is growing stronger as Sabin tests Bodie's warrior abilities ... and suddenly a wolven finds himself on the trail to a battle where time, the moon, and his own wyrrd blood could very easily conspire to kill him long, long before the pagano army reaches Rome. There is a gun called the Gustav ... a bridge that must be crossed ... a bloodbath to be avoided, even at the cost of wolven blood. The omnibus version of this trilogy is significantly cheaper than buying all three issues individually. The massive 450pp book ships as a hardcover, bound in black marble and scarlet braid. It's ... quite awesome! 450pp pages, hard-bound with black marble covers and scarlet braid Largely unillustrated, just jam-packed with a/u fiction Published for the first time as an omnibus in 1994. [2]

Flesh and Steel Trilogy by Jane from Nut Hatch

Jane has written a flamboyant and imaginative fantasy set in an age where vampires, witches, were wolves, sorcerers and witches are not myths, but real and the Christian church is waging a bitter, brutal and bloody battle to root out and destroy them. The setting is an alternate 15th century, with the Moor and the Saracen in partnership with the vampires, and allies, against their mutual enemy.

In Flesh and Steel, Raymond D'Elan, the vampire general, leads his army against the 'devil cardinal' while the wolven Bodie, prays for release from his five years of torture, poisoning and abuse as the prisoner and involuntary 'scryer' for the cardinal, and see the city's, and his, green eyed, wild ringlet haired, leather clad rescuer in his visions.

As this is the first of a trilogy, some time is spent in setting up the main characters and providing them with backgrounds and motivations for their actions. Much of this is quite fascinating, as is the description of the powers that the vampire, witches etc. possess. Jane has given her vampires the ability to consume the life force of humans, but has chosen for them to eat, and drink normal food and not be reliant on blood for nourishment. She has also made them ancient and ageless. Bodie, the wolven is a wolf at the full moon, but human the rest of the time, and possessed with the gift of farsight.

The main story is about Raymond and Bodie, their meeting and their instant attraction, counterpoised with the vampire's distrust of him. Bodie convinces Raymond and his more sceptical lieutenants, Sabin and Tanis, of his sincerity in wanting to be part of them, and in so doing introduces us to Sebastian, the troubled priest, and Domenico, Bodie's one-eyed mentor. Once accepted, Bodie has to go through a years probation and service before he can be fully accepted into Raymond's clan. The story finishes with Raymond off to battle and Bodie beginning his indentured service.

Blood and Fire and Soul and Storm are the second and third parts of the trilogy. Blood and Fire is the preparation for the final routing of Rome with Raymond called away to fight and plan and Bodie left at the mercy of the Slave master and the traditions and daily humiliations of slavery. I found this part variable and a little repetitive, while Soul and Storm brought the trilogy to a magnificent end with Bodie, now a free man, in great demand as a highly skilled scryer. He scrys for the Scotlanders, who will support the pagano army if the auguries are favourable, and foretells victory, but tells no one, not even his lover Raymond, the truth. Bodie grows in stature, strength and self esteem as he commands his own troop of men, despite Raymond's misgivings, and their relationship slowly becomes one of true equals.

I'd heard a great deal about this trilogy before I read it, much of it totally contradictory, but what did come through was the rich imagery of the story. Having now read all of it I think that the setting, the style, the descriptions, the characters, the imaginative plot and the sheer flamboyance of the piece far outweighs any occasional tumbles into somewhat verbose purple prose and repetitions. I also like the characterisation of the alternate Bodie and Doyle, despite Bodie's initial weakened and subservient position. There were sufficient similarities to the originals to engage me, and Jane managed to maintain the plots momentum and intrigue, while developing Raymond and Bodie's relationship throughout the three books. [3]

Bearing in mind that it's well over five years since I read these stories, my recollection of them is that Doyle is the dominant character here - he's a vampire, the leader of an army, and a man who knows exactly what he wants and doesn't hesitate to take it. Bodie is a werewolf who can foresee the future and is a far more submissive character, readily agreeing to a life in Doyle's service until such time as he can prove himself to be as great a leader of men as his master. By the end of the trilogy the two are living together as equals.

It's quite likely that the passage of time may have clouded my remembrance of these stories, but I'm fairly certain that I haven't seen this same Bodie/Doyle dynamic in any of Jane's other stories. If there are any that follow a similar pattern then I'd be very happy to read them! [4]