Solitaire is a gen Starsky and Hutch story by Connie Faddis. It was published in the fourth issue of Zebra Three. 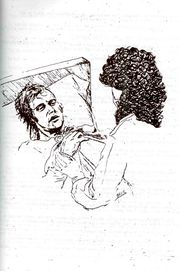 art for this story by Paulie Gilmore, as it appeared in the print zine

"Hutch ponders death and dying, based on the events in 'The Plague'."

My favorite story [in Zebra Three] was a toss-up between "Solitaire" and "Join Me in LA" until the last six pages of Faddis's story. The last six pages should be an entirely separate story. As an ending to to "Solitaire." it is anticlimactic and maudlin. Taken separately, it is an interesting after-an-episode vignette. "Solitaire" takes place during and after "The Plague." The focus is on Hutch and his thoughts and experiences as he lays dying. Other than the ending, it is Connie at her best in description, insight, and dialog. [1]

Connie also has a much longer story, "Solitaire," that has to do with "The Plague." The charm of that episode as always escaped me, but this story is a first-rate, three-Kleenex, heartstring puller. [2]

One expects more from Faddis [3]. And, fortunately, gets it in "Solitaire", which is The Real Thing and more than fulfills the promise made by Connie's by-line. It's a series of short, "unseen" portions of The Plague, with emphasis on S&H's profound need of each other. It's also something of a structural tour de force, as it manages quite well to hang together as a story in its own right. [4]

My favorite story [in Zebra Three] was Join Me In L.A. — there's so much more plot there than normal. A person gets the least bit tired of all the scenes with one of our heroes suffering in a hospital bed and the other hovering tearfully over him. So then I get to Solitaire with Starsky practically doing a hummingbird impression and in spite of myself got caught up in that too. [5]

Ah, Ms. Faddis, I do love your style! The characterization is flawless. The story was very suspenseful (even though I already knew how it was going to end), and well-written The thoughts of Hutch and Starsky add greatly to the story. Actually, they are the story. Solitaire forced so many emotions out of me so fast that I had trouble dealing with all of them, beautiful from beginning to end. (The ending was very nice!!!) [6]

As for the Faddis works -- what can I say about her writing that hasn't already been said. Solitaire was absolutely incredible. Dear God! How can one person have so much talent?! It just isn't fair to the rest of us floundering and plodding along! Page 115... WOW! Talk about insight! Psychological visibility. Excuse me a minute while I bury my weak attempts in the back yard! [7]

Solitaire - SUPERB --- BEAUTIFUL. It grabs you at the start and doesn't let go or let down, some places actually had me in tears. It contains insight that makes S&H live, that makes them real, not just a couple of fictitious characters. I don't know how Connie (Faddis) does it, but I hope she keeps on writing them. [8]

Solitaire is my major problem with Z3#4, "Don't sit under the apple tree with anyone else but me" was the only scene really worth the story. It's the gem at the bottom of the case of costume jewelry. Connie's brains, talents, and insights can be and have been used so much more effectively and honestly -- she's found a slipstream on emotions we've already experienced, and is gliding on it, not working for her keep by beating her wings to really fly. ...I object to being played with emotionally, to having things I've already felt in the episodes dragged out to use again to make the writer's job easier. When the purpose is for a reference, that's fine; but to continually bring up things from the past, rehash them, to USE instead of to illustrate-- that's cheating. I feel like I'm being used, that my emotions are being played like a guitar tuned to D minor and that can't play any other chord. You know how that ends up? I feel bored. I will, however, point out a couple of things that are very right with Solitaire. Page 115, Starsky's thoughts in the middle of the page. YES! the urge to stash this treasured friend in a golden box — lovely, lovely line, and very real. Very Starsky. A beautiful paragraph, and the Faddis I admire so deeply. And page 124, the "in a minute" line. Indeed, the whole scene. It's perfect. It's almost — almost — worth plowing through the rest of the story to get to that scene.

(In short) Join Me needed more; Solitaire needed less, Nothing in life is perfect, I suppose.[9]

I just finished reading VolumeIV of ZEBRA III and I've got a problem. You know, it's much easier to write critism than kudos, because critism sounds so much more sincere, but I just don't have any criticism to write. Oh sure, I have my favorites among the stories and poems. El Monte Blues, MatingSeason, I know it's rather obvious that anyone reading ZEBRA III and bothering to write is an S&H fan, and sure, I try not to miss the show. I even watched the rerun of THE PLAGUE but I watched it that time, like I had the first time -- with my hands clenched in frustration and ready to scream over what they were doing to those two men who are as real to me as the guy walking down the street outside my window -- maybe even more so. It was the waste that bothered me. The premise was good, but they didn't show what was there. All the caring and love. All we were shown was the sickness and anger- - until Solitaire.

I guess it all boils down to wanting to say a special thank you to you and Connie Faddis for Solitaire. I've been watching the episodes this season looking for something that as too often [had] not been there. You two gave it all back to me — you and Melanie and Marian and Laurie and Roy Smith, And I do appreciate it. Thank you! [10]

'Solitaire' focuses on Hutch as he is dying from the plague. Except for the final six pages, which should have been a separate story, it is Connie at her best in description, insight, and dialog. [11]

In the series, I can't think of any evidence for regarding KH's immediate family as hostile, lacking in human sympathy — whatever. Yet many stories present home-life chez Hutchinson as unhappy, parents as formal, rich — often with the implication that such qualities must go with wealth. Connie Faddis's 'Solitaire' is a notable exception to this general pattern which so much fanfiction accepts. I wonder why. [12]