Slashpoint was an early mm open slash mailing list, created in October 1996 by a grad student at University of California, Davis and housed on the university server, like most lists of the day. At one point it had roughly 200 members -- a very respectable size for the time.[1] 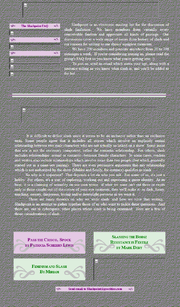 The listowner, Laura Akers, created the list as part of her studies, to try to figure out why Constance Penley's theories about slash -- that (K/S) slash was a way for women to write about egalitarian relationships that wouldn't have been possible in the het ST:TOS universe -- didn't seem to hold true any longer. Laura was an X-Files fan who saw a ready-made egalitarian heterosexual relationship onscreen -- Mulder and Scully -- and yet people continued to write XF slash, sometimes even deliberately creating a power imbalance. So she set up the list to gather information about why people write slash, promising to keep it going and active for at least five years, since that was how long she expected her studies to last.[2]

Laura was upfront about the academic purpose behind the list, and very clear on how any information from the list would be used both by her and by the other academics on the list.[3] Thus reassured, people joined the list in droves.

In the early days, the list had an "archive" -- a collection of stories whose titles would be posted to the list once a week (along with a list of slash sites). List members could request any title they wanted, which would be emailed to them. The stories were not put up on the web, partly in hopes of convincing writers who were wary of the Web to include their stories in the archive, for limited distribution.[4] The "archive" doesn't appear to have survived beyond the list's first year, possibly because web-based archives were growing steadily and making it less necessary.

Eventually, the FAQ included a list of websites and archives for people to find fiction[5], although this wasn't a patch on Karen Nicholas's huge Slash Fan Fiction on the Net site.

During its active years, like other pan-fandom lists of the time, Slashpoint was a clearinghouse of information and discussion. It had announcements of new public lists and archives; announcements of personal websites (or updates of same); requests for betas; zine and vidtape announcements; mentions of articles in the press or academia (both rare, at the time); rants on bad writing and crappy grammar; show-pimping posts; (plaintive) requests for tapes; personal-address changes (how else would we keep track of each other?); slashy actor gossip; con reports; informative links to or quotes from gay sites; philosophical discussions on how people's nationalities affected their fanfic (and slightly less philosophical discussions on using Brit or Aussie English for American shows, or vice versa); spirited discussions of whether criticism was a good thing or not; anime and manga (and yaoi and shounen ai, etc.); the legalities of fanfic; sexual and gender identity; you name it, people talked about it. The list even occasionally had fanfic, including round robins, although fanfic wasn't technically allowed.[6]

Slashpoint grew quickly and was hugely active early on, although after the first year or two it settled into a pattern of lulls and bursts of activity (often fights, since contentious subjects got the most response), as happened on most lists. Fans joked at the time that lists were subject to yeast growth curves, including choking on their own waste (or at least, ending up with fans intimidated/annoyed by flamewars into no longer posting). The unusually high concentration of academics who carried on academic conversations may also have contributed to intimidating some people into no longer posting; by the list's later years, many conversations turned academic within just a few posts.

"What sort of a slash list is Slashpoint?" I meant to answer this right off, but it's a hard question. (How would you answer, 'What kind of slash list is Virgule?') At least part of why it is difficult is that both of our lists are markedly different than they were even 3 months ago. When last I did a survey, less than 1/3 of the women on Virgule were on any other mailing list. Now, as far as I can tell, less than a 1/3 *aren't* on another (probably single-fandom) list. The same thing is happening to Slashpoint (and SlashSis, another general fandom list).

It will be interesting to see in the long run whether general fannish interest lists survive, competing as they are against the siren call of the specific fannish obsession.

"In which way(s) are "they" different from "us"? Anybody on both lists care to comment?"

Along with a host of small ways, there are two major ways they are different:

A *much* higher % of them think of themselves as net fans.

Sometimes we have similar threads at the same time, sometimes one list is active when the other one has people posting 'test' messages because it's been so quiet, sometimes they're both very active on very different topics.

And, at one point, about 1/3 of Virgule was on Slashpoint (though the lurking/posting patterns seemed to be different)."

The list ended with a whimper rather than a bang. Laura Akers had stopped participating and even responding to email (making it impossible for people to either leave the list or sub to it, since automated subscription functions no longer worked), and the list began being regularly hit with spam.[7] Eventually, people just stopped posting anything at all.