Siriusly Smiling is a wizard rock compilation album released to raise money for the National Foundation for Facial Reconstruction. It was put together by Jarrod Perkins of Gred and Forge and features twenty different wrock bands.

The album art was created by Frankie Franco III.

Harry and the Potters, one of the bands on the album, writes:

"All bands were asked to write and record a song with the only criteria that “ALL OF THE SONGS SHOULD BE FUNNY”. We recorded our song, Vernon Dursely [sic], at our parent’s house in September 2008. Paul played the ukulele and Joe played the slide whistle."[1]

Many of the songs are meta in nature: "The Year Harry Went Emo" describes Harry's OotP characterization and also includes a critique of Michael Gambon's acting (in the lyric "He misses Sirius Black / And Michael Gambon's acting's crap"),[2] and "Creepy Mustache" is about film!Remus's unusual facial hair. Others humourously appeal to fanon tropes and themes, such as Gred and Forge's "Brotherly Love", a song about Weasleycest. 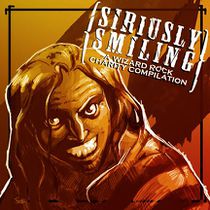