Harry and the Potters

Harry and the Potters is the first and best-known wizard rock band, made up of brothers Joe and Paul DeGeorge. 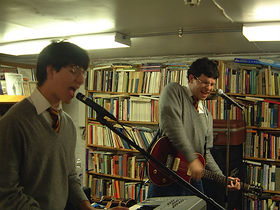 The band was created an hour before their first live performance on June 22, when the bands scheduled to play at a concert in the DeGeorges' backyard failed to show up and the brothers were left to entertain the audience.[2][3]

The next spring, with the forthcoming release of the fifth Harry Potter book, the brothers decided to dig up their Harry Potter-themed songs and record an album. Their self-titled first album was released on June 21, 2003, the same day as Harry Potter and the Order of the Phoenix, and Harry and the Potters were featured at a number of local release parties, playing five sets within a period of 24 hours.[4][5]

The band began to experience widespread popularity with the release of its second album, Voldemort Can't Stop the Rock, on June 29, 2004 and the extensive North American and European tours that followed.[5][2]