From Fanlore
Jump to: navigation, search
Sakurazuka Seishirou and Sumeragi Subaru are two of the three main protagonists of CLAMP's manga Tokyo Babylon. They both appear in X/1999 as well, which is set in the same universe nine years later. The complex, dark and twisted nature of this pairing lies in the happenings of Tokyo Babylon: Seishirou and Subaru are from rivaling onmyouji clans, although Subaru doesn't know that. A sixteen year old boy, shy and deeply devoted to his twin sister Hokuto, he believes that the almost ten year older Seishirou is a kind-hearted veterinarian. It is revealed to him later in a very brutal way that Seishirou is in fact the Sakurazukamori, a powerful onmyouji himself and ruthless killer on top of that.

Even though Tokyo Babylon is over a decade old and X has been finished as well for a long time (at least X-TV and the OVA), Seishirou x Subaru remain a strong pairing in the memory of many fans.

Seishirou/Subaru, most would consider, is a classic shounen-ai couple. A few years ago, when the internet yaoi fandom was relatively small, there were a few popular series with ships that every die-hard fan knew at least one of. And S/S was one of them. They are considered a classic, perhaps, because they come from a dying fandom yet they persevere, and while few people actively ship them, they are still adored by many. A classic is something that has stood the test of time, and Seishirou/Subaru has yet to be forgotten.[1] 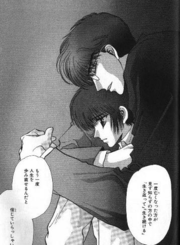 There appears to be some debate among fans regarding the question of whether this pairing is canon or not. In a 2006 ship_manifesto post, livejournal user chrysa wrote,

While many ships struggle with not having enough canon evidence or subtext, the problem with Seishirou/Subaru is that there is too much to sort out. It's hard to grasp and digest it all, especially since much of it is very indirect. [...] There is no exact moment that can be proven that Subaru fell in love with Seishirou; it was something that gradually happened over the course of the series and even before. However, the precise moment he recognized those feelings was at the end of volume 6, chapter 10. [...] Is Seishirou/Subaru canon? I have to give a tentative yes, though it is still something widely disputed by the fandom. There are no kisses, no happily-ever-after's, no fairy tale romances. But there are two confessions of love, though both tragically misplaced. The only thing missing is everything in between.[2]

Themes and Trends in Fanfic

Seishirou x Subaru is considered an enemyslash pairing. With the source material not just bordering on the dark side, but crossing that border systematically again and again, stories containing torture and death weren't uncommon. Given their past, it's very hard to make Seishirou and Subaru into a happy couple - which is why the other extreme (OOCness, crack fic, humor and AUs) was quite popular. Only a few stories managed to cover the middle ground in a believable way.