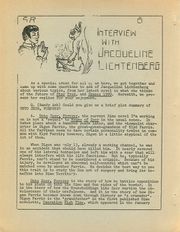 In it, she discusses her Sime~Gen book, "House of Zeor," and Star Trek Lives!. She also talks about "the future of Star Trek and Space: 1999."

Q. (Howard Holmes) What do you think of Roddenberry's attempt to make an ST movie (considering some of the comments on same in Halkan Council 12)? A. On the Star Trek movie, I think, without having read the script GR wrote, that the story line ought to give room for developing the kind of thing fans want to know and see in our favorite characters. Whether the particular things chosen to be revealed are appropriate choices seems to be not worth discussing since ST has an established record of vast changes between first story outline and shooting draft. I like the idea of taking plenty of time to develope the characterizations, and I personally can live quite well without action/adventure... They haven't asked me [for advice], and they probably won't.

A. On STL!, I believe I answered Sharon's attitude toward the book when I answered Carol Lynn's review in Halkan Council. Basically, it is that STL! suffers from a bias of my own (and Sondra's, I believe too). Carol Lynn mentioned having seen a first chapter draft for the book in which I discussed FANDOM IS A WAY OF LIFE as opposed to FANDOM IS JUST A GODDAMNED HOBBY - the two major attitudes in s-f fandom which also appear the major dichotomy in ST fandom. There was a reason for that discussion, and it was to point out to the reader that I am a FIAWOL person.

Sharon and Carol and many other fans who have been every thing from shocked to disgusted from STL! are basically Hobby people. (Not all Hobby people react this way, not all WOL people react the other way.; My feeling is that David Gerrold spoke up very well and very eloquently for the Hobby people and it was time for the Way Of Life people to have their say in print. STL! is only half as long as David's two books, so that hardly seems unfair. STL! does not set out to criticize ST, to tell what's wrong with it. We say quite plainly that we recognize that ST has many faults, shortcomings, etc., but that we feel it would be a loss of proportion to emphasize the faults that ST shares in common with all other tv shows and ignore the virtues it has which no other tv show has. So we focused on ST's virtues to the exclusion of almost all else, trying to pin down and define that element which makes ST unique. My personal opinion is that it would be impossible to write a book of criticism of ST. Every single thing you pick on to call 'rotten' will be called ST's only redeeming feature' by some substantial segment of the viewership. This was the major discovery from my questionnaires and gave rise to the concept of the Tailored Effect. Everybody sees their very own ST and every one else's ST is totally invisible to them. That is why some people not many really, but enough to be worth counting — seem to feel that STL! doesn't say anything true about ST. However, by my best estimate, I believe we have spoken truly for about 80 to 85% of all ST viewers, at least in some part. Everything we have said is true for SOMEBODY.

The book has garnered some very, very favorable reviews in newspapers around the country, and we have many, many heartwarming letters of ecstatic praise for the book from those who had these things in their heart but were unable to verbalize them. Some even say that they feel STL! is as or more important to them that the show itself, which is just an example of what I mean by ecstatic praise.

A. Space: 1999. Well, ST is still the only sf on tv. Enough said? You see, as far as I can tell, 1999 is not sf at all, but horror fantasy. There is absolutely no scientific credibility. The scripts have no internal cohesion except the thread of horror which always ends in some bit of gratuitous horror which is irrelevant to everything and usually wholly implausible. There is no attempt at character development. And there is no sf at all in the show.

So I won't try to judge 1999 at all. I detest horror as a field and have even less use for horror fantasy. For all I know, 1999 may be the best horror fantasy ever done in a video medium, just as ST is the best sf on tv, or in the movies for that matter. But that isn't for me to judge. It's way-way outside my field.